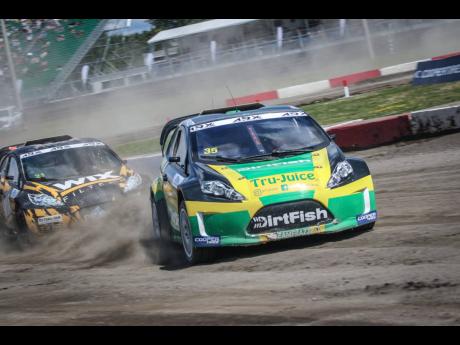 Contributed
Jamaican driver Fraser McConnell in action at the Canadian leg of the ARX2 Championship on Sunday, August 4, 2019.

McConnell made history in October, winning the ARX2 Rally Cross championship, becoming the country’s first-ever rallycross champion. Gunter says that the achievement has encouraged young drivers to follow along similar paths to success showing what is possible.

“Fraser’s 2019 championship season is a significant achievement as it is the first USA-based motorsport championship won by a Jamaican in twenty years,” Gunter said.

“[It’s had a] tremendous impact on local motorsport, especially among the young drivers who have witnessed Fraser’s path from karting to rallying and now an international championship in rallycross. Fraser’s success inspires others to emulate him and has proven that Jamaica’s home-grown talent can compete and win internationally.”

The 21-year-old McConnell, who had no prior experience in rallycross, managed to win the championship in his second season on the American Circuit. Gunter says that his accelerated growth over two years was satisfying to witness.

[It has ] been extremely rewarding to observe Fraser’s rapid improvement,” he said. “His quick adaptation to the rigours of rallycross competition was remarkable to see.”

Gunter hopes that McConnell’s success will have a ripple effect for the sport in Jamaica, challenging drivers to test themselves against world’s best and for more corporate partners to see motorsports as a feasible avenue to align their brands with.

“Besides the talent to produce excellent results, a strong committed effort to push past our national boundaries is necessary,” he said. “Sponsorship players a big part in motorsport and sponsors have begun to recognise motorsport as a viable avenue for brand exposure and marketing.”

While praising McConnell, Gunter also remembered youngster Alex Powell, Jamaica’s first driver to sign with a Formula One (F1) team, Mercedes-AMG F1. Gunter hails both drivers as trailblazers in their respective disciplines which, in his opinion, assist in displaying Jamaica’s success in sport on a global scale.

“McConnell and Alex Powell are the pioneers in their respective genres of rallycross and karting and their continued success help to further highlight Jamaican excellence in sport internationally,” he said.