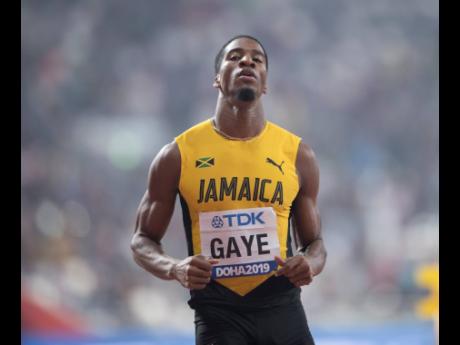 Having emerged as one of the country’s top 400m runners over the past three years, Sprintec head coach Maurice Wilson said quarter-miler Demish Gaye is targeting a big personal best (PB) this year.

The 26-year-old Gaye has made it to two consecutive World Championship finals in 2017 and 2019, where he finished sixth in London and fourth in Doha, respectively.

Gaye last year moved his personal best time from 44.55 seconds set in 2017 to the 44.46 seconds he clocked while finishing fourth inside the Khalifa International Stadium at the World Championships.

Wilson underlines that once Gaye remains healthy and sharp this season, he will be a major contender for a medal at this year’s Olympic Games in Tokyo, Japan.

“Demish Gaye has made two consecutive World Championship finals. The first year, he came sixth and, last year, he was fourth, and so I expect to him to first of all get to the Olympic final and I am expecting him to medal once he is healthy,” said Wilson, before considering any potential pressure on the athlete.

“There could be pressure possibly but he has not shown it,” said Wilson. “He is kind of an introverted athlete because he does not necessarily share his thoughts and so it is difficult to know, but what I know for sure is that he would have been more experienced now, having gone to two major finals.”

Wilson shared that he is not surprised by Gaye’s progression over the years given his discipline and commitment.

“He is a very professional athlete. He is very focused, very motivated and these are some of the things that you would want from an athlete when you are coach, in order for you to get them to perform well,” Wilson stated.

“Training has been fairly good so far, but sometimes you wonder if the long season last year will some point take a toll, but there is no pondering about that because we are already in the season and so I am just hoping that everything will work well,” he said.