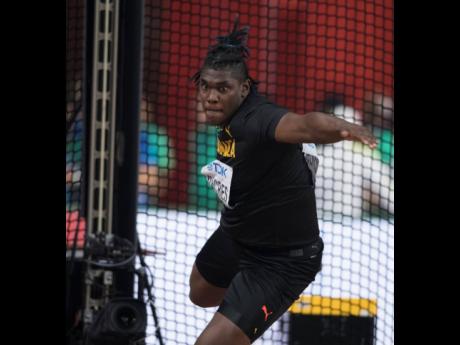 Dacres led training partner Traves Smikle and former schoolmate Chad Wright past the 60m line as they took second and third with throws measured at 61.01m and 60.76m, respectively.

The national record holder at 70.78m, Dacres was happier about his current physical condition than his throwing in the expansive Manchester High School grounds.

“We never really got to do what we were supposed to, but it’s just the start of the season, so we’re good,” the 25-year-old said.

“I have no niggles, anything like that, probably a little toe pain, but you know, nothing too major. I’m really good,” he added, perhaps remembering that he was obliged to do knee surgery a couple of years ago.

Dacres was in a spot of trouble when he came back to contest the shot put, but saved the day by abandoning his usual spin for the old-style Parry O’Brien in round three. In the last round, he trailed Rasheed Downer of University of the West Indies after the former KC thrower has reached 16.25m in the fifth round. Coolly, Dacres spun his final attempt out to 18.25m for the win.

Mullings, last year’s ISSA/GraceKennedy Boys and Girls’ Athletics Championships (Champs) Class Two Boys shot put winner, did a double with distances of 58.78m in the discus and 17.52m in the iron ball event. Bedward was even more impressive, covering 58.24m in the Class Two discus. That’s almost 3m further than the Boys and Girls’ Champs record of 55.37m.

Like Mullings, Williams has moved up to Class One after a success last year in Class Two. She, too, was triumphant in Manchester with a 12.42m winner in the Class Two girls shot put. Her teammate Shamar Blake was second, well back on 12.04m.

Another notable win was secured by St Jago’s Excelsior transfer Shauntae Foreman, with a leap of 5.80m in the Class Two Girls long jump. Her teammates Janea-Marie Yee-Sing, Tafada Wright, and Latavia Galloway took the Class One discus, Class Two shot put, and the javelin throws with respective distances of 41.62, 13.28 and 39.89 metres.

The jumps were blustered by breeze in the afternoon, but KC still won the Class One and Two long jump through Jaheem Cox and Anthony Willis. Cox covered a noteworthy distance of 6.78m to hold off Brian Smith of St Jago High School by just 6cm.