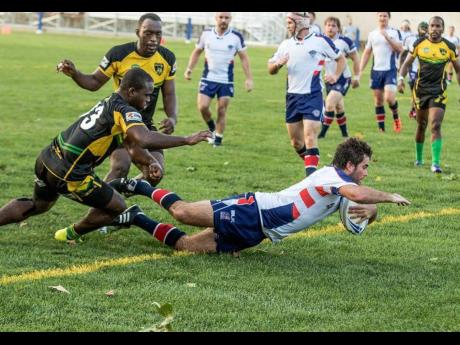 File
Reggae Warriors players Leon Thomas (left) and Jermaine Pinnock (second left) attempt to prevent a try by US Hawks during their Americas Cup final in Jacksonville, Florida, on Saturday, November 18, 2018. Jamaica won the game 16-10 to qualify for the Rugby League World Cup in 2021.

Jamaica’s senior men’s team head coach Romeo Monteith is upbeat after the Reggae Warriors were placed in Group C of the 2021 Rugby League World Cup in a draw made yesterday.

The Reggae Warriors have been placed with 2013 World Champions New Zealand, Lebanon and Ireland.

Monteith says he is happy with the draw because he sees competitive games in this group.

“I think we can match up well against Ireland,” he told The Gleaner. “Lebanon, being a quarter-finalist at the last World Cup are the second seeded team. It’s gonna be a tough job against them but I also believe that we can compete. New Zealand is a class team in the group, former champions from 2013, but I know the boys will be excited to take on the challenge and represent Jamaica well.”

Monteith says that knowing the teams now gives his technical staff a better idea of the preparations needed ahead of Jamaica’s debut at the tournament, which is 21 months away.

“It certainly helps in examining the style of play of these teams, in terms of doing proper video analysis over the next 16 or so months,” he said. “A number of the nations, including ourselves, will be playing games leading up to the World Cup. Most times, we are playing games a month out from the World Cup. The final warm-up is a month out so we just have to pay keen attention to who their danger players are, what their skill sets are, trying to negate their strengths while exploiting our own.”

Despite the team qualifying for the World Cup from November 2018, there has been little assistance offered to the Jamaica Rugby League Association (JRLA), especially financially. But Monteith, also a JRLA director, is still hopeful of gaining sponsorship in a timely manner before the competition.

“We still don’t have any local corporate partners yet, but now that we have the draw out on the table, we have persons actively seeking sponsorship for us,” he said. “I’m hoping that corporate Jamaica will respond in kind. England has been buzzing. We played against England Knights last November and that was good. We had a few [overseas] companies come and assist us and assist the boys. So they didn’t have to spend their own money for that. So I’m hoping that we can improve the environment, make it as professional as possible for the boys to do their best in the World Cup and the practice games that we have leading up to it.”

Monteith says the team will be negotiating a number of practice games ahead of the World Cup and the JRLA will also use the America’s Cup, which Jamaica will look to defend on home soil, as preparation.

“We have the Americas Championship here in November, so that’s one of the major tasks at hand, as well as the A team will be going to Florida to play against the USA South All Stars, so we have a few things in the pipeline that we will announce more clearly in the next coming weeks,” he said.

The 2021 Rugby League World Cup takes place in England from October 23 to November 27.