Scorpions put through ringer on Day 1 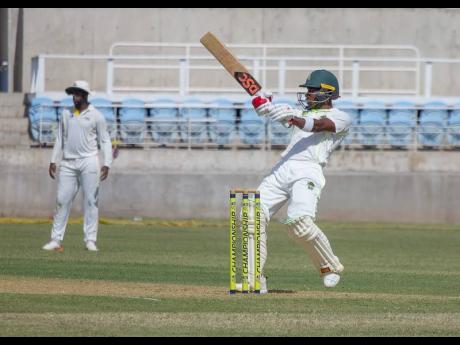 It was like déjà vu for the Jamaica Scorpions as the Windward Islands Volcanoes made them chase leather for an entire day as they did against Trinidad and Tobago last week.

At stumps on day one of their second-round Cricket West Indies Professional Cricket League Regional 4-Day Championship match, the Volcanoes closed on 314 for five with wicketkeeper Emanuel Stewart not out on 46, and with him is Keron Cottoy on 29.

Kavem Hodge was one of the stars with the bat for the visitors, making 88 while veteran opener Devon Smith weighed in with 77 against seamer Derval Green, who bagged three wickets.

Once again, it was a tough day in the field for the Scorpions, who won the toss and chose to bowl on a Sabina Park surface that had a tinge of grass.

That decision looked justifiable after opener Desron Maloney fended a lifting delivery from Nicholson Gordon to Paul Palmer at gully for 26 at 43 for one.

Kavem Hodge then joined the veteran Devon Smith and they made use of some loose wayward bowling from the Scorpions to share in a century stand that would knock the stuffing out of the home side.

The Scorpions did not help themselves in the field either, as they put down a few sharp chances, as Smith capitalised to bring up his 60th first-class half-century off 115 balls.

Hodge was equally brilliant, as he cut and pulled his way to his 10th First Class half-century as the pair added 130 runs for the second wicket.

It took a brute of a delivery from Marquino Mindley in his second spell after lunch to remove the dangerous Smith, who was bowled for 77 which included nine fours.

Hodge and Kirk Edwards continued to bat positively, and the pair took the Volcanoes to tea at 206 for two with Hodge on 72 and looking intent on getting three figures.

With spinners, Patrick Harty Jr and Jamie Merchant ineffective, the seamers, however, had their best period with the ball in the last session, as they adopted a fuller length to the batsmen who found the swinging ball hard to negotiate.

Green would eventually break the 44-run partnership as he had Edwards caught behind for 29. Eight runs later, Green once again used his outswinger to great effect, as he induced the edge of Sunil Ambris for seven to leave the visitors on 225 for four.

The fall of the wickets saw Hodge receding in his approach, and it was that tentativeness that cost him his wicket, as he played on Green for 88 at 242 for five.

Hodge faced 171 deliveries and hit 12 fours as the Scorpions had their tails up in the final hour of play. However, wicketkeeper Stewart, 46 and Cottoy, 29 continued to frustrate the home side with a 72-run unbroken sixth-wicket partnership as the home side past the 300 mark on the opening day.

Green has so far been the pick of the bowlers with three for 58 while Mindley and Gordon are the other wicket takers.