Seeking more glory - Gayle, Fraser-Pryce want to inspire the next generation of track and field stars 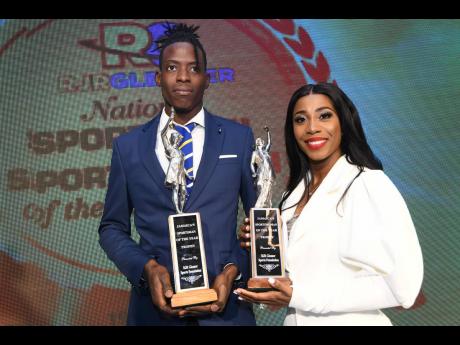 Rudolph Brown
National Sportsman of the Year 2019 Tajay Gayle and Sportswoman of the Year 2019 Shelly- Ann Fraser-Pryce pose with their trophies at the RJRGLEANER Sports Foundation awards function, which was held at The Jamaica Pegasus hotel in New Kingston last Friday night.

Tajay Gayle and Shelly-Ann Fraser-Pryce, 2019’s respective RJRGLEANER Sports Foundation Sportsman and Sportswoman of the Year, are navigating different challenges relative to where they are in their careers.

The rhetoric regarding Fraser-Pryce’s successes of 2019 has highlighted how much she achieved while balancing her time as athlete and mother. She took a gold medal in the 200 metres event at the Pan American Games in Lima, Peru, last August then two more at the World Athletics Championships in Doha, Qatar, in the 100m and 4x100m events in late September.

At 33 years old, she credits endurance, consistency, and focus for able to remain one of the best sprinters in the world despite her hiatus from athletics for the birth of her son, Zyon, now two years old.

“While on my comeback, I’ve understood the importance of patience and enduring and understanding that when it’s your time, your time will come,” Fraser-Pryce said in her acceptance speech on Friday night. “You just have to be consistent. You have to work hard, and the goals and the dreams you have set for yourself, you have to continue to push towards those.”

Despite all Fraser-Pryce has accomplished, she remains intent that on becoming the first woman to win three Olympic gold medals in the 100m. That hunger means she will now aim for that feat at the Olympic Games this summer. She hopes this will inspire others, like herself, to be aware that there is always more to be achieved.

“As I continue to evolve and I look forward to my fourth Olympic Games, I pray that I continue to inspire our generation to understand that you write your own story. Nobody gets to write your story. As we continue to excel in our different fields, I’m just excited about where track and field is and where we’re headed.”

Gayle, at 23 years old, has a fledgling career. However, he has already put himself in the history books by becoming not only the first Jamaican man to take World Athletics Championship gold in the long jump, but also to become the nation’s record holder with a mark of 8.69m. This was after a silver-medal performance at the PanAm Games. Like Fraser-Pryce, he wants to be an inspiration to others.

The former Papine High School student is looking to show others from low-income communities, like his in August Town, St Andrew, that their beginnings do not have to limit what they can achieve.

“August Town, a place most call ‘the ghetto,’ where the odds are against young ‘youths’ like me, but I guess this all proves one point: that not everyone can be great, but greatness can come from anywhere,” he said.

“I’m here to show the world that there’s much more than meets the eye in the ghetto areas, and more children there can be just as good as I am. There’s a lot of talent in the world. It’s just to find them.”

Gayle says that he can cope with the pressures of now an example for youngsters to look to because he takes each experience in its moment. But he told The Sunday Gleaner that he was still coming to terms with his new-found fame.

“As you can see, I’m a very shy person,” he said. “More and more, these [situations] will get me out of my shell.”

Gayle has already returned to training as he looks to secure a debut at the Olympic Games. There, he will look to extend his national record and perhaps challenge the world record of 8.95m, set by American Mike Powell in 1991, in Tokyo, the Games’ host city.