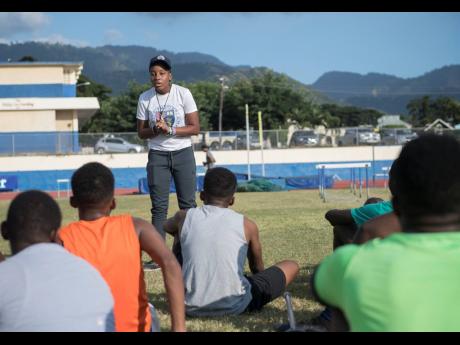 National senior women’s lacrosse player Monique Morrison wasn’t a part of the team that made history last November in qualifying for the 2021 Women’s Lacrosse World Cup in the United States.

However, she was busy on home soil, reaching a significant milestone of her own.

When Jamaica College (JC) begin their lacrosse season against Penwood High tomorrow, she will be on the sidelines as the first women’s head coach in the history of the institution. She is also one of the youngest at age 23.

Morrison has been a member of the senior team for four years and had previous coaching stints at Alpha Academy and St Hugh’s High School. While lending her skills as a certified official during a high school game last March, she had a fateful encounter with JC team manager Ra-Umi Alkebu-Lan, better known as Zeus.

“I was still practising and would officiate matches from time to time because I’m a certified coach and official, so they need me for games to work sometimes,” Morrison told The Gleaner. “I was at a finals or semi-finals game and that’s where I met “Zeus”. He basically threw out there that he is the manager of the team and he needs a coach because they don’t have one.”

“Once he told me that, I was interested because lacrosse has always been a passion of mine for about six or seven years now since (it was introduced in) Jamaica.”

Love for the game

Morrison’s love for the game was cultivated when it was still being introduced to the island. She got involved in coaching when Kevin Dugan, a volunteer coach from Florida, invited her to take part at a Lacrosse camp at St George’s College. From that first session, she knew that she had found her calling.

“I realised that it was fulfilling to teach people how to play a sport that I love and there wasn’t a lot of hype on it, so it felt good building the sport, being a part of that. It was kind of weird. I have been passionate about things before, but I’ve never been passionate about a sport before until this one,” said Morrison.

Her appointment took seven months to – in her words, “get the ball rolling” as she not only had to meet with the school’s sports master, but with the members of the Old Boys association and school principal Wayne Robinson.

With her appointment made official on October 17, 2019, she had her first interaction with the team that managed to place fourth last year without an official coach. The response from the team towards her was, in her mind, refreshing as they were pleased that they finally had someone qualified to take the reins.

“They didn’t see me as a female coach, I’m just a coach. I haven’t’ seen them treat me differently as a female coach, which is refreshing especially in today’s climate,” she said. “It’s really nice to have a group of boys respectfully address me as coach and that’s it. I’m just their lacrosse coach and I’m grateful for that.”

Morrison is focused on taking the programme to the next level, already seeing progress with the team during her first three months on the job. She hopes that her impact and her appointment will allow other women to forge similar paths.

“It gives women a certain type of hope to try to push to take up places and spaces in male-dominated fields. It’s something that I’m proud of, that I got the opportunity to do this,” she said.