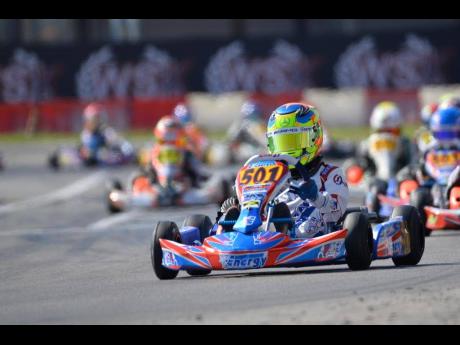 For young Jamaican driver Alex Powell, the year 2019 could not have gone any better.

In a season where he won the ROK Super Final in Italy and became the first Jamaican and Caribbean driver to sign to a Formula One team, Powell’s success was honoured at the RJRGLEANER National Sportsman and Sportswoman of the Year Award ceremony on Friday at the Jamaica Pegasus, where he won the Victoria Mutual Building Society’s (VMBS) YOUTH award.

The 12-year-old karting prodigy was thankful for the accolade and proud of the hard work that he put in last season.

“It means a lot to me. I have been trying my best every single time I’ve been going on the track,” Powell told The Gleaner. “I’ve been doing my best every single time and to come here and to get this really amazing award, it really means a lot to get this. I always dreamed of getting this award even when I was younger so it’s really nice that I’m getting this.”

The year 2019 was a breakthrough one for the youngster, who signed with Mercedes AMG last April, home of F1 drivers Valtteri Bottas and six-time world champion Lewis Hamilton.

But as much as he has achieved since making his debut in 2015, Powell has not been immune to adversity and pressure.

According to him, the weight of expectation had a negative impact on him in the aftermath of him signing to Mercedes, with results not going his way. In dealing with the disappointing finishes, he said that his changed mindset was the key to breaking through his slump.

“Before, when I got signed in February up until June, I felt quite a bit of pressure and the performance wasn’t going so great. And then I started going into a race with a different approach just racing completely for myself. Not thinking about anything, not thinking about my sponsorship. Just racing completely for myself and that’s when my results just went up,” Powell stated.

His mature approach has led to great results in the latter part of the 2019 campaign, including several top-five finishes and podium places, which all culminated with what he calls the most significant win of the season, the ROK Super Final.

“The results last year were quite strong, especially towards the end of the year. I did a lot of races. Almost every weekend I was racing. I had a lot of podiums, quite a bit of wins and a lot of top fives. So I was up there pretty much the whole season,” he said. “But I think my most prestigious win last year had to be the Mini Rock international final, which is sort of like the World Championships for the class I was in. We were fighting for the win up until the last corner and luckily we came out on top.”

It will be a busy 2020 for Powell, who will have a more loaded racing schedule than last year with only four to five weeks off. However, he hopes that his continued perseverance will be a major asset, as he moves up the karting ranks and eventually reach the ultimate goal of racing at the F1 level.