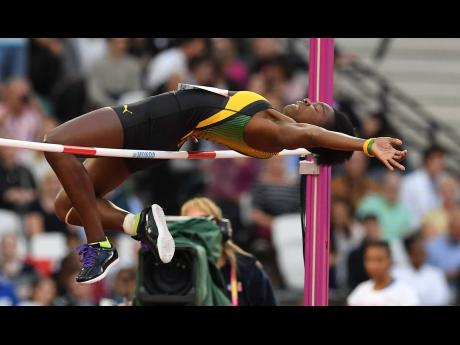 Kimberly Williamson, bronze medal winner at last year’s Pan American Games in the high jump, is training for the Olympics in Jamaica. Williamson said she made her mind up to make the change after working with a former coach at the Games.

Now 26 years old, she struggled with influenza in the chill of Lima, Peru, to win the bronze with advice from Marlon Gayle, who coached her to a national senior title when she was at Edwin Allen High School.

“I decided this year, with Olympics being so close, to come back to my coach, the one [who]pretty much made me the athlete that I am, so I’m working with Mr Gayle for Olympics this year,” Williamson said.

“He was the one that pretty much made me, and working with him at PanAm, I actually realised that there’s a lot of potential, and that relationship that we had in high school, it’s still there.”

Recounting a competition where she fought through illness, the 2016 NCAA champion recalled: “My asthma flared up because of the change in climate. So it was really good because Mr Gayle is Mr Gayle. I don’t think I could do anything else when he is coaching other than being tough mentally and performance-wise.”

Having studied at Kansas State University, in chilly Manhattan, Kansas, she’s adjusting to the warmth of her new training base at the G.C. Foster College of Physical Education and Sport.

“Where I was, it’s minus zero, but it’s been a lot of fun,” she said. “I got to see my dad, who I haven’t seen in about four years. I got to spend some time with my family here. It’s been fun, and it’s good because I actually have athletes training with because it was actually just me by myself, so I actually have the guys, who are at G.C., training with.”

Progress has already been made.

“Oh my God! I’ve run so much this year, more than since I started track and field, which is ridiculous,” she said, “but it is working because I am stronger and faster. I’m a lot more explosive. I’m trimming down, so that’s a lot better because in the USA, it was a struggle to even lose weight, much less to maintain it.”

That’s critical for a high jumper.

“I’ve been here for two weeks now, and I’ve already lost like seven pounds, which is ridiculous because I eat everything regardless, and I’m still losing weight. It goes to show the difference in the food that we have here to the food that we have available there, but I’m losing weight and maintaining it and I’m getting stronger,” Williamson, who could be in action at the Gibson-McCook Relays next month, said.