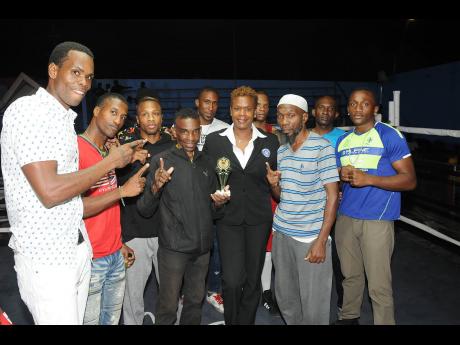 A good all-round performance by its team of boxers gave Stanley Couch Gym (SCG) its their second successive victory in the National Boxing Championships on Saturday.

SCG scored 24 points, one point ahead of Bruising Gym, 23. The Jamaica Defence Force (JDF) team scored 17 points for third place, while GC Foster, Port Antonio and Oracabessa Gyms scored four points each and Heavy Metal and Oracabessa gyms had two points each. Twelve boxers from overseas participated, and they added to the intensity of the competition. They won four of the six finals in the Elite class.

The surprise of the night came in the welterweight division, where defending champion Joshua Frazer, who is based in Canada, and was crowned Caribbean welterweight champion last month in Trinidad and Tobago, lost by disqualification in round two, to Jameer Edwards who lives in Florida.

Frazer entered the bout as the overwhelming favourite and won the first round. During this round he was hit by low blows on a couple of occasions by Edwards, and received what is called a protective eight count in amateur boxing, near the end of the round, to give him a brief recovery period. Edwards received a couple of cautions in this round, for coming in too low, head first, a breach of the rules

In the second round, Frazer complained about another low blow and kept gesticulating and complaining.

He became more aggressive in this round and after a spirited exchange between the boxers, which saw Edwards fall to the canvas, referee Kevin Stupart stopped the contest, and disqualified Frazer for unsportsmanlike conduct. Frazer left the ring a very disappointed man, still complaining.

The most exciting fight of the night, was the featherweight final between Sanji Williams from Bruising Gym and Marvin Shea from the JDF.

This bout lived up to expectation and was action-packed all the way. Both boxers were aggressive throughout the contest, and had the crowd cheering wildly. For his performance in this bout, Williams was named the outstanding boxer of the competition.

In other bouts, Canada-based Trevor Thonson performed very well to take the lightweight title with an impressive victory over Damion Williams from the JDF. England-based Damon O’Neil upset defending champion Janathan Hanson in the middleweight division by way of a split decision.

Kheron Gilpin, also from England, had too much fire power for Oracabessa’s Renaldo Beckford, and won by unanimous decision. Omar Campbell from Bruising Gym then won the heavyweight title, by outclassing Jermaine Richards from SCG, who retired at the end of the second round, in the night’s final bout.

In the lone Novice final, Juezere Heron from SCG defeated Antonio Webster from Savanna-La-Mar on points to take the lightweight title.