No shame in our performance – Busby 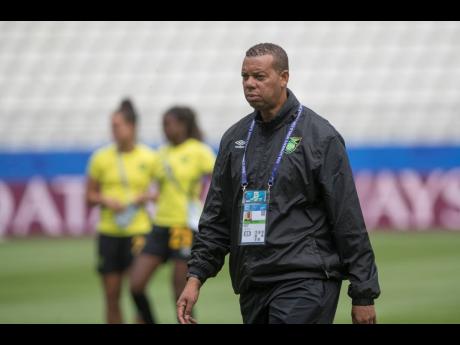 Jamaica’s senior women’s football team head coach, Hubert Busby Jr, says he is proud of their performance despite their 1-0 loss to Mexico in their Concacaf Women’s Olympic qualifying match in Edinburg, Texas, on Wednesday night.

Busby, who recently took over from Hue Menzies, says the team needed more time together to work on their game plan, however, he was pleased with their effort against a technically sound Mexican side.

“We really didn’t have the opportunity to work off some of the rust, and we needed more time to come up with an identity,” he said. “We haven’t got together as a group in a while, and because of that, we started a bit tentatively in the first half, but we came into our own in the second half, and we showed what we can do.”

The former Crystal Palace goalkeeper says the team had the better of the chances in the contest, however, more ruthlessness was needed in front of goal. He says that they will take the next couple of training sessions to work on their movement and transitional link-up play.

Assistant coach Andrew Price told The Gleaner that the medical staff is still monitoring the progress of striker Khadija Shaw, who picked up a head injury in the dying moments of the contest.

Shaw was released from the hospital on Wednesday night after being cleared on all scans, which came back negative.

It is still not known if the Bordeaux striker will be fit and ready to face Canada in their next encounter on Saturday as she has been put under day-to-day observation.

The Jamaicans could make changes for that encounter, with captain Konya Plummer slotting into the central defensive position to partner Allyson Swaby.

Busby said Plummer was not 100 per cent ready for the Mexico clash, and the coaching staff wanted to monitor her minutes while giving opportunities to other players in the squad.

He was, however, pleased with the defensive work of the Swaby sisters, Allison and Chantelle, who shut out the Mexicans for most of the contest.

The Jamaicans face a must-win game against Canada on Saturday, however, the task will not be easy as the high-riding Canadians are coming off a morale-boosting 11-0 win over St Kitts and Nevis.