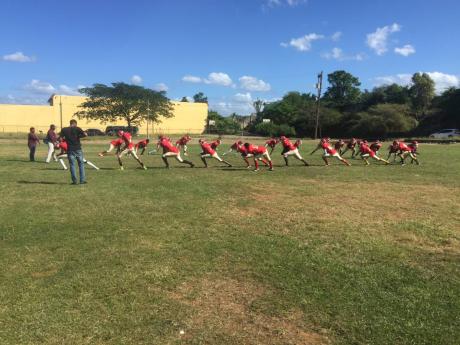 He says that with this plan in mind, talks are already ongoing with a number of these secondary schools.

“What’s going to have to happen is that those schools are going to have to come on board in the spring with flag football, and they get acclimated to the game through that, and then we would upgrade them to tackle football after that,” Harriott said.

He is pleased with the overall roll-out of the sport as this is the first time that it has been played on a competitive level in the country.

“It has gone very well,” he said. “We had a number of competitive teams. Even the teams that are at the bottom of the ladder are very competitive. Their losses weren’t too great. The kids have acclimated to the sport extremely well.

“This is the first time that American tackle football has been played anywhere in Jamaica.”

Developing and nurturing local talent for success in the sport is only a small part of the mission for Harriott. His primary objective, he says, is to ensure the students’ overall development. To that end, he has encouraged not only coaches, but also certified referees, to play a more vested role in shaping the lives of young men, especially those at risk.

“We are trying to create a mentoring programme where our referees and our coaches mentor these young men and make sure that they are on the right path,” Harriott said. “The main point of why are we doing this is to bring certain discipline, accountability, to students that are more than likely marginalised.”

Harriott is proud of the change in the attitude of players since the start of the league, noting that he has received a good response from the respective principals who have observed a difference in the behaviour of students.

“The feedback that I get from the principals is that the kids, including the ones who are troubled, are making an about-face when it comes to their behaviour in the classroom and in the hallway,” he said.

While Harriott hopes that the students will be able to develop in the sport, he says that the greatest measure of the programme’s success is the ability for students to excel academically.

The National Gridiron Championship game takes place tomorrow at the UWI Mona Bowl with a game between Newell High (5-2) and undefeated Munro College (7-0) at 3 p.m. This is the culmination of seven weeks of the inaugural competition between 10 teams in rural Jamaica, which started in November. The event begins at 10 a.m. with exhibition games and will include a consolation match between DeCarteret College and May Day High School.