Djokovic, the ‘King of Australia,’ faces Thiem in Open final 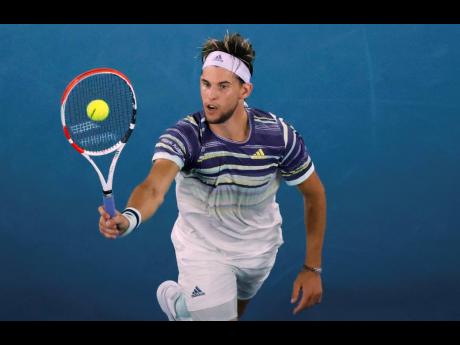 Dominic Thiem knows what it’s like to make it all the way through the rigours of a half-dozen best-of-five-set matches across two weeks in order to reach a Grand Slam final – only to run into that particular tournament’s greatest champion.

It’s happening to Thiem at the Australian Open, where he will face defending champion Novak Djokovic for the title tomorrow.

Just like it happened to Thiem at the French Open, where he was the runner-up to Rafael Nadal each of the past two years.

Djokovic already owns a record seven trophies from the hard courts of Melbourne Park. So far, he is a combined 15-0 in semi-finals and finals in Rod Laver Arena.

Nadal has been even more prolific on the red clay of Roland Garros, going 24-0 in the last two rounds en route to his 12 championships there.

Also at stake for Djokovic will be a 17th Grand Slam trophy overall, which would push him closer to the two men he is chasing: Nadal with 19, and record-holder Roger Federer with 20.

In addition to his haul from here, Djokovic’s major championship collection already includes five from Wimbledon, three at the US Open and one from the French Open.Djokovic won his semi-final against Federer in straight sets.

“It gives me more time to recuperate and gather all the necessary energy for the finals,” Djokovic said.

Aside from his track record over the years in Australia, Djokovic also can point to his more recent success: 16 consecutive sets have gone his way.

Djokovic leads the head-to-head series 6-4, but Thiem has won four of their past five meetings, including the most recent, at the ATP Finals in November.

“I have to risk a lot. I have to go for many shots. At the same time, of course, not too much. That’s a very thin line,” Thiem said. “In the last match against him, I hit that line perfectly.”

Both seem to have a preternatural ability to come through in the clutch.

Consider Thiem’s performance in heart-in-the-throat tiebreakers in his last two matches: 3 for 3 against Nadal in the quarter-finals, then 2 for 2 against Zverev.

“Definitely one of the best players in the world. Deserves to be where he is,” Djokovic said. “It seems like he’s improved his game a lot on hard courts, because his game is more suitable to the slower surfaces. The clay, of course, being his favourite surface.”