Shaw poised for return against Canada 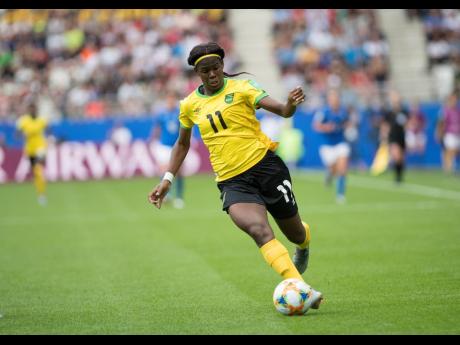 Jamaica senior women’s football team head coach Hubert Busby Jr says that striker Khadija Shaw is on target to return to the field for their crucial Group B final round Olympic qualifying game against Canada this afternoon at 5:30 p.m. The country’s all-time leading goalscorer suffered a head injury in their 1-0 defeat to Mexico in their opening game on Wednesday.

Shaw, who turned 23 yesterday, was involved in a collision with a Mexican defender and had to be taken off the field and transported to a hospital in Edinburg, Texas, where all Group B matches are being held. Busby said that the decision was a precautionary measure, but that she is recovering and responding well.

“We wanted to make sure that everything was ruled out. Obviously her health and well-being is [important to] us. And so that’s why we did [it]. But she is a lot better so we are going to see how she is in the morning,” Busby told The Gleaner.

Busby has confirmed that Shaw has cleared the concussion protocol and resumed full training with the team yesterday. But he said that they will do a final check on her today before determining her readiness for the afternoon’s contest.

“She’s good,” he said. “We just have to see. Everything is day to day. But she’s good [yesterday], she was good [on Thursday]. And obviously we will wait to see how she feels tomorrow.” he said.

The Reggae Girlz are in third place in the group on no points and must get a result against the eighth best team in the world and the second best team in the region. While acknowledging that the task is daunting against the two-time Olympic bronze medallists, Busby says that the team will take the right approach to keep their chances of qualifying for the Tokyo Olympics in July alive.

“We still control our destiny, but we need a positive result to advance to the next round. So we need to go for it and the players know that mindset and we are going to make sure that we execute the game plan, but take the game to them in the right moments,” he said.