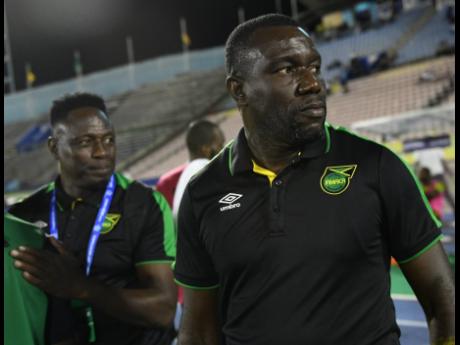 National senior team head coach, Theodore ‘Tappa’ Whitmore, has refuted claims that he is eyeing a new assistant coach and that the current holder of the post, Jerome Waite, will not accompany him and the team as the second-in-command into the Concacaf World Cup qualifiers, which begins later this year.

According to a source close to the Jamaica Football Federation (JFF), Waite is on his way out of the job with Paul Hall tipped to replace him. The move, it is said, will come as Whitmore looks to strengthen his coaching staff going into the final round of the Concacaf World Cup qualifiers.

However, Whitmore insists that Waite will remain in his assistant coaching position for the qualifiers, although he admitted that he has made a request for and would welcome additional members to his coaching staff.

“[It’s the] First I am hearing that,” Whitmore said when asked if Waite will be replaced. “He (Waite) will [continue as assistant], as far as I know that is how it is and nothing has changed. I don’t know anything about that.”

‘Help would be welcome’

Whitmore also denied knowing of any intention to make Hall a member of the coaching staff but said they need all the help they can get to make the team as efficient and competitive as possible.

“This is the first I am hearing these things. I don’t know of any changes but we want additional staff to what we have. One or two man cannot coach a national team again. We want a complete staff, we want video analysts, a variety of coaches and any way people can come in and help. It’s not just me and Jerry (Waite) alone, we want other people to come in and help the programme because this is bigger than us,” Whitmore said.

“But we have always made requests for additional staff,” he added.

General secretary, Dalton Wint also denied any knowledge of a possible change to the coaching staff. He said they have held no such discussion on Waite being removed as assistant coach and stated that he had no information as it relates Hall coming into the programme.

“Nothing has been discussed. We haven’t sat down and discussed the senior men’s programme in detail but there is nothing to say that a person has been removed. I know nothing about that and I have not heard Mr Paul Hall’s name being called,” Wint declared.

Waite, a three-time Premier League winner with Arnett Gardens, has been assistant to Whitmore since September 2016.