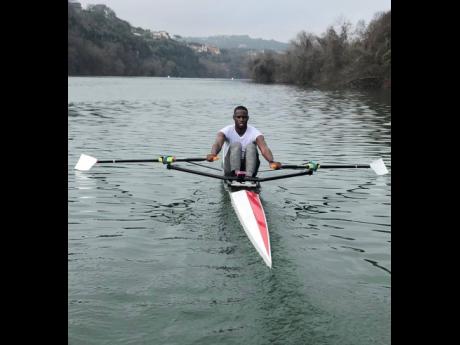 Shahiede Patterson is seeking to be the first Jamaican to qualify for rowing at the Olympics, and he is working hard to achieve the feat.

Patterson, a fourth-year student at the Caribbean Maritime University, has had to balance his academics and training since he was selected from the national draft, but says that he has had a desire to participate in the sport after making a switch from fencing.

“[Rowing] was an initial passion but I started with fencing but didn’t like it as much,” Patterson told The Gleaner.

Jamaica Rowing Association (JRA) president Tobias Scott said that Patterson’s drive to compete in rowing was evident from the beginning.

Patterson’s focus has not deterred as he intensifies his preparations for the Olympic qualifiers to take place on April 4, in Rio de Janeiro, Brazil. He left the island in January for a three-month training camp in Texas to get ready for the challenge that awaits him. He says that the training has been going smoothly although there are improvements to be made technically.

“The camp is going well. There is progress but some things need working on such as technique and getting maximum speed,” he said.

Requiring a top-two finish in Rio de Janeiro to make history for Jamaica, the 20-year-old hopes that by qualifying, he will be able to give the sport a big boost locally.

“It would mean that Jamaica’s rowing has got the breakthrough that it needed and, for me, it would be a dream come true,” he said. “Representing Jamaica has been my dream, so it means a lot.”