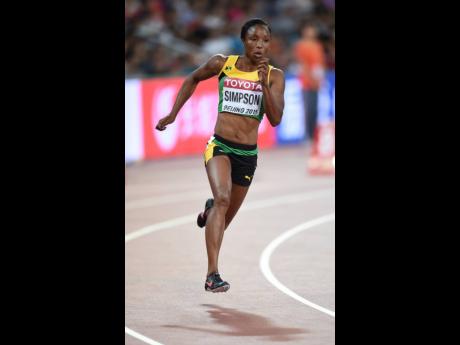 Eighteen years ago, when Jamaica hosted the World Junior Championships at the National Stadium, Sherone Simpson played a key role in a historic victory. After a false start, she composed herself, sprang from the blocks at the second time of asking and sent Kerron Stewart, Anneisha McLaughlin-Whilby, and Simone Facey on the way to Jamaica’s first World Junior gold medal in the girls’ 4x100m relay. It was the start of a distinguished international career.

She didn’t win at the ISSA/GraceKennedy Boys and Girls’ Athletics Championships (Champs), but excelled at Manchester High School in a memorable senior season. In 2003, she and Stewart raced at breakneck speed here at Champs and at the Carifta Games in the under-20 category.

A 2004 Gibson Relays 100m record of 11.11 seconds showed that her choice to go to the University of Technology was a wise one and by summer time, she was in the Olympic 100m final in Athens. A storming second leg glued together another bit of history as Tayna Lawrence, Simpson, Aleen Bailey, and Veronica Campbell-Brown boomed a national record – 41.73s – to win the nation’s first gold medal in the 4x100m.

In 2006, she did what few ever achieved when she finished the year as the world number one in the 100m. Her fine season produced a personal best of 10.82s and a win over Campbell-Brown in the 200m at the Commonwealth Games. Two years later, she reached the Olympic 100m final for the second time and, with Stewart, tied for the silver in the historic one-two-two result topped by Shelly-Ann Fraser-Pryce.

Troubled by injury, her steely will nevertheless made her a finalist at the 2011 and 2015 World Championships over 200m and a member of a consistently good 4x100m unit. In 2015, she gave us all a ‘last lick’. Though the lane assignment stationed her on the outside, she outran a strong field to take the 100m at the Pan American Games in Toronto, Canada. Her winning time of 10.95s was her 13th trip under the 11-second barrier and a highlight of her sojourn at the Sprintec Track Club.

Known for her joint silver in Beijing 2008, Simpson belongs to an elite group of Jamaican sprinters who have run in both the 100 and 200m Olympic final in the same Games, as she did in 2008.

Her retirement comes with the Tokyo Olympics just around the corner. At 35, the 2005 World 100m finalist is probably still good enough to make the Jamaica team in the 200m. Pretty often, experienced athletes view the greatest show on earth as the right stage from which to wave goodbye. However, after almost two decades of service in black, green, and gold, she has earned the right to move on at her own dictates.

Sherone was a stalwart. Good enough to run the 400m in 51.25 seconds, the lady remained a dignified presence throughout her career and a combination of her experience on the track and her interest in sports psychology promises much. It’s no coincidence that Simpson and Professor Greg Haughton, the World and Olympic 400m bronze medallist, see mental preparation as an important territory for our athletes. They’ve been in the wars and they know for sure.

Sherone Simpson has a glittering trophy case, with her Olympic gold and silver medals having pride of place. Add her Commonwealth and PanAm gold medals, her 2006 world 100m ­number-one ranking, and the 4x100m relay ­glories, and you have a career worth remembering.