Indoor record will have to wait – Williams 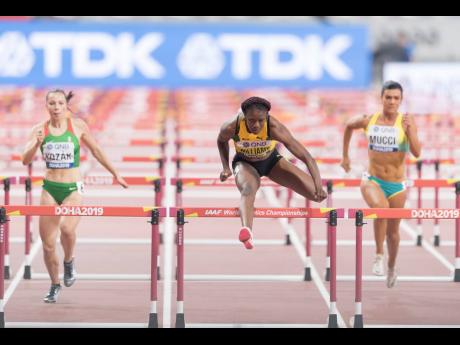 However, like the World Indoor Championships, that mission will have to be postponed until next year, as the 27-year-old is not risking any injury in her efforts to make her first Olympic team later this year.

The former Johnson C. Smith University student ran under eight seconds in the 60m hurdles for the first time, when she blitzed to 7.86 seconds at the South Carolina Gamecock Invitational on February 7. She followed up that performance with a 7.99 seconds stroll in the preliminary round of the Tiger Paw Invitational last Friday, but did not show up for the final because of soreness in her hamstring and has decided to cut her indoor season short to concentrate on securing her spot on the team to the Tokyo Games later this year.

Williams told The Gleaner that she would have gone after Michelle Freeman’s 22-year-old national record of 7.78 seconds last Friday, if it wasn’t for the sore muscles.

“When I was at Boston, it came up on the screen that the national record was that (7.78 seconds) and I was saying to myself that if all things being well this season that is something that I could target. So when I was going into the meet last Friday, it was something that was in the back of my mind, but I didn’t run the final because I felt my hamstring. The heat was pretty much a jog,” Williams said.

“The indoor season is done for me. Next year since the World Indoor Championship has been postponed until then, I’ll try to get it then,” she added.

The World Indoor Championship has been postponed until next year because of the outbreak of the novel coronavirus in China, where the event was scheduled to take place.

Williams smashed the national record in the 100m hurdles, which was held briefly by Janeek Brown, when she registered 12.32 seconds at the Muller Anniversary Games in London last year.

She has also enjoyed success in the 200m this Indoor season as she posted 23.18 in January.

“It’s been a while since I have completed a background season injury-free, so it is definitely encouraging and hopefully we can just build on that for the outdoor season,” Williams said.

Williams won a world title in the 100m hurdles in 2015 and finished third in the event last year in Doha, Qatar.