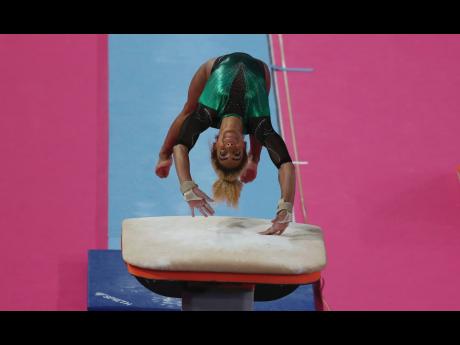 Jamaican gymnast Danusia Francis says that she is closer to a return to full training as she nurses injuries which have limited her preparations for the Olympic Games in Tokyo this Summer.

The 25-year-old Francis, who will be Jamaica’s second athlete to compete in the sport at the Olympics after Toni-Ann Williams’ appearance at the Rio 2016 Games, said that the problems started in November when she suffered a thumb injury.

Her bid to make a quick return led to more complications, which set her back further in her preparations ahead of the July 24 - August 9 Olympic Games.

“Unfortunately, I hurt my thumb in November, and then it wasn’t fully recovered and I trained on it, so this led to a back injury. So now I’m trying to be patient and not make the same mistake twice in rushing back into full training,” Francis told The Gleaner.

She says, however, that she is improving and although frustrated that it has hampered her preparations for this summer’s Games, she is grateful that the timing has not robbed her of the opportunity entirely.

“I am now at about 75 per cent and I am able to do more each day. It is frustrating, but I am glad it happened now and not closer to Tokyo,” she added.

In the build-up towards Tokyo, Francis is currently participating in league competitions in Spain and Italy and is expected to compete this weekend in the Serie A league in Ancona, Italy, even though she will not be attempting her full set of routines.

Despite the setback, Francis, who hopes to be back to full fitness by late April, believes that the timing has been a blessing in disguise, as the setback has also forced her not to push herself too much in training.

“It is easy to burn out in this sport, so in some ways it has prevented me from overtraining too early in the year. I have been able to work on other weaknesses with the extra time during training. I am also experienced and I know my body well,” Francis said. “The pain I am in right now, I could push through, but since we have enough time, I am able to take a more cautious approach and recover in a timely manner.”

Francis is hoping to continue the momentum she gained last year when in addition her Olympic qualification last October, she became the first Jamaican gymnast to compete in a gymnastics final at the Pan American Games, a feat she achived last summer in Lima, Peru.

With the Olympics now just a few months away, Francis feels that keeping the same routine and mindset will serve her well, rather than making any changes at this stage.

“It is good to always be adaptable and open to learning about different areas that might help you, but I think I have got this far, so I wouldn’t make significant changes this close to the finish line,” Francis said.