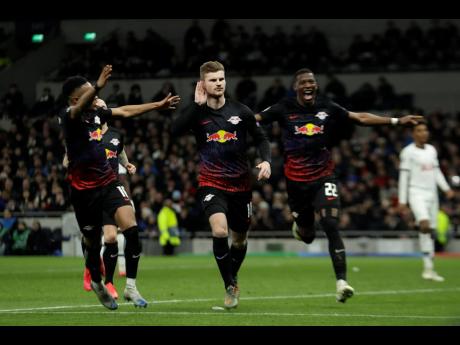 AP
Leipzig’s Timo Werner (center) celebrates after scoring his side’s goal during a first leg, round of 16, UEFA Champions League match against Tottenham Hotspur at the Tottenham Hotspur Stadium in London, England yesterday.

Timo Werner led Leipzig to their first UEFA Champions League knockout stage victory, netting a penalty to seal a 1-0 victory over Tottenham in the first leg of their round-of-16 meeting yesterday.

A clumsy tackle by Tottenham defender Ben Davies on Konrad Laimer led to the penalty that Werner converted in the 58th minute for his 26th goal of the season.

Such was the dominance of Leipzig – particularly in the first half in north London – that it was the German visitors that looked the more established Champions League side rather than last season’s beaten finalists.

Tottenham’s frustration was encapsulated by Dele Alli flinging his boot on the ground in annoyance while walking to the bench after being substituted.

Tottenham were already trailing at that point, and it took going behind to find the goal threat absent in the first half.

Giovani Lo Celso curled a free kick against the post and Lucas Moura headed wide on a night when Tottenham’s shortage of attacking options was exposed.

With Harry Kane already sidelined, Son Heung-min joined the striker in the treatment room this week after surgery on an arm that could see the South Korean miss the rest of the season.

It is a season where Tottenham are struggling to qualify for the Champions League for a fifth successive season. Tottenham are a point behind fourth-place Chelsea in fifth in the English Premier League, which would secure qualification if second-place Manchester City’s European ban is upheld.

Leipzig are faring far better in Germany, sitting in second place in the Bundesliga.

Now Leipzig are well-placed to make the Champions League quarter finals in only their second season in the competition and a decade after playing in the fifth tier.

The second leg is on March 10.