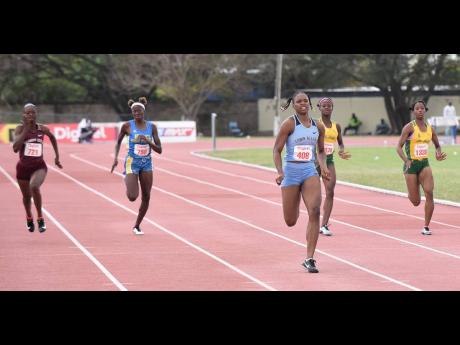 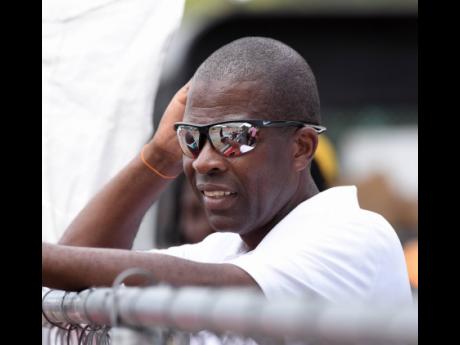 Yesterday was highlighted by several records on the track with Edwin Allen and Hydel leading the way. However the performance of the day and the Championships came in the relays as the Edwin Allen Class Two quartet of Serena Cole, Tina Clayton, Brandy Hall and Tia Clayton, in that order, was simply brilliant. They had the fair sized crowd in a frenzy as despite several hitches in their baton exchanges they stopped the clock at an unbelievable 43.80s to obliterate the old mark of 45.02s set by St Jago last year.

It was the first time a team in the class was going below 44s and it was the second fastest ever time by an Edwin Allen quartet, as only their Penn Relays winning time of 43.62s, done last year, was faster.

“I am kind of in shock,” Tia Clayton said after the race. “I knew we could have gone that fast, but didn’t expect it to come today.”

Edwin head coach Michael dyke was not surprised by the fast time done by his quartet.

“I knew they had it in them,” he said. “I expected it and they could have gone much faster. I expected around 43.50s, but they had some faulty exchanges. This will be corrected for Gibson McCook Relays next week.”

Earlier, Kevona Davis continued her impressive form after producing a record run in winning the Girl’s Class One  200m. Despite a terrible start, Davis was still able to catch her rivals early to win, going away in the end to post a new mark of 23.30s to erase the old mark of 23.56s set by Holmwood Technical’s Michae Harriot two years ago. Holmwood’s Kishawna Wallace, 24.24s, and Jago’s Kayla Bonnick, 24.36s, ended second and third respectively.

“I really had a poor start today as I came out of the blocks last and had to play catch up, but I was able to still win easily,” Davis said. “I am looking forward to the Digicel Grand Prix final and Champs, and I am just hoping to remain healthy for the remainder of the season.”

Tia Clayton wrote her name in the record books after winning the Class Two Girls 100m in 11.29 seconds, as teammate Hall who had the record for one day, ended second in 11.38s, also inside her old mark of 11.46s. Holmwood’s Sasheika Steele ended third in 11.50 seconds.

Among the boys, Clarendon College’s Rajay Morris ruled supreme in the Class One 200m after winning easily in 21.22s, relegating St Jago’s Kavian Kerr to second in 21.66s, with Bridgeport High’s Junior Grant getting third in 21.76s. Earlier, Jago’s Javari Thomas won the Class One Boys 100m after clocking 10.70s to get the better of Manchester High’s Keino Wint, second in 10.73s, and Rasheed Foster of Charlemont was third in 10.80s.

Edwin Allen had a quinella in the Boy’s Class One triple jump as Odane Smith, 13.77m, won ahead of Trevor Gunzell, second with 13.38m. Damar Marshall of St Jago was best in the Class One high jump after clearing the bar at 2.09m, while Vere Technical’s Kimarly Cooper took second in 1.90m.