Fury king of the heavyweights 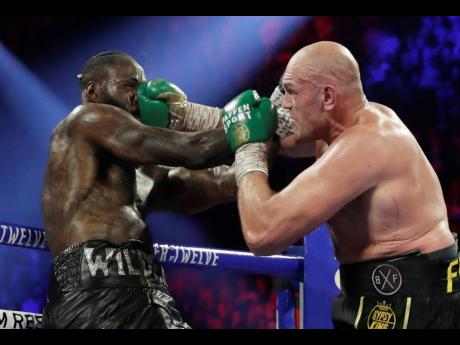 The world has never seen a heavyweight champion quite like Tyson Fury, the British behemoth who gave Deontay Wilder a ‘beat down’ to win the heavyweight title and then celebrated by leading his fans in a chorus of American Pie from the ring here at the MGM Grand hotel.

He can fight, he can sing, and he can talk. Oh, can he talk.

Before the fight, Fury talked nonstop about how he was going to switch from boxer to puncher to take the heavyweight title from Wilder. After the fight, he talked about how he did just that – and will only get better as his career goes on.

“Not bad for a fat guy who can’t punch,” the 6-foot-9 Fury crowed after handing Wilder his first defeat in a fight so one-sided that Wilder’s corner finally threw in the towel at 1:39 of the seventh round of their heavyweight showdown Saturday night. “I had a dream of coming to Las Vegas and taking over. Now here I am.”

It wasn’t supposed to play out like this. Not against an unbeaten heavyweight champion so feared, he had knocked out 41 of 43 men put in the ring against him.

Not after Fury plunged into the depths of despair a few years back when his life was spiralling out of control, and cocaine and alcohol had made his weight balloon 37 pounds.

But now the Gypsy King has the heavyweight title once again, five years after first winning it from Wladimir Klitschko.

And, no matter what his fellow Brit Anthony Joshua might say, he should be hailed by all in boxing as the best heavyweight in the world.

“Everybody knows I’m a master boxer,” Fury said. “But that didn’t work the last time. I got a draw and a draw is a failure to me. The only way I could guarantee I was going to get a win was a knockout.”

The path to greatness in Sin City was a troubled one. Fury had to beat his demons before he could beat the best heavyweights, and then had to beat the sceptics to be considered the best of the best.

Against Wilder, he proved he was just that in a fight most never saw coming. Most, that is, who thought Fury was bluffing when he said he would go after Wilder from the opening bell in the rematch of their draw from 14 months earlier.

He put on a show in a theatrical entrance, wearing a crown and carried aloft on a throne. Then he put a show on in the ring, knocking Wilder down in the third round with a right hand to the head, and again in the fifth with a left to the body.

By the time Wilder’s corner threw in the towel, the outcome of the fight had long since been decided. Wilder was taking punches to the head without landing any of his own, and any thought that he might suddenly unleash a right hand to change things was long gone.

And the singing afterwards? Well, Fury might not want to quit his night job – one that made him $30-40 million for the signature win of his career.