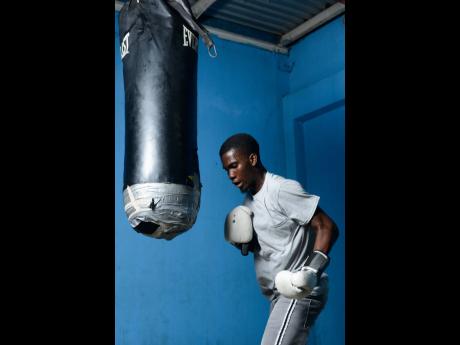 Jamaica’s amateur boxers did themselves proud last Saturday night when they produced a scintillating performance to defeat a team from Panama 5-1, to mark the opening of the Montego Bay Boxing Gym located at the Montego Bay Cricket Club at Jarrett Park.

The proceedings were interrupted on a couple of occasions by intermittent showers, but the rain stayed away long enough for the card to be completed. The new gym, which will be run by the Jamaica Boxing Board, was formally opened Saturday morning.The Panamanians were making their second appearance in Jamaica as part of the Jamaica Boxing Board’s ‘Gloves over Guns’ programme. When they were last here in April 2019, they defeated Jamaica 3-0, but the local team turned the tables this time around.

It was a night of excellent and exciting boxing. Three of the bouts were for youths up to 18 years of age, and the other three for those 19 and over.

Jamaica got a good start from featherweight Jared Palmer, who matched his more experienced opponent Leonidas Cuevas punch for punch and came away with a hard-fought points decision. In the second bout, Jamaica’s Arnold Anderson gave a game performance, but his opponent, Juan Jiminez, had too much experience and punching power for him, and he lost by unanimous decision.

Another featherweight, Daniel Hylton, was up next and his pinpointed jabs gave him the advantage over his opponent, Moises Rodriguez. This was a close, hard-fought battle, but Hylton’s all-round effort and a strong third-round performance gave him the edge. He won 2-1.

The start of the elite matches was explosive, as Olympic prospect, featherweight Sanji Williams, came out aggressively against his opponent Jose Mejia. Williams pursued his opponent, from the start of the bout and after only a minute of the contest, he caught Mejia with a right hook to the head that put him down and out. The official time was one minute and six seconds.

Williams told The Gleaner afterwards that he did not come out looking for a knockout, butwhen the opportunity came, he took it.

“I am pleased with the outcome, and was happy that I could do this for Jamaica” Williams said.

Janathan Hanson who normally fights at middleweight, stepped up to light heavyweight to take on Panama’s Alberto Peralta. He had more experience than his taller opponent, and he used this, and a good jab, to win by unanimous decision.

In the night’s final bout, another Olympic hopeful, lightweight Trevor Thonson came back aggressively after a slow first round to defeat his taller opponent, Edwardo Beckford, on points. This was a close contest with a lot of action, and it put the seal on an excellent night of amateur boxing.