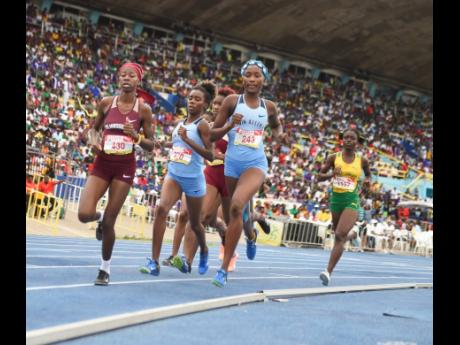 Gladstone Taylor
Rushana Dwyer of Edwin Allen (right) on her way to winning the Class Two Girls’ 800m final at the ISSA/GraceKennedy Boys and Girls’ Athletics Championships at the The National Stadium on Saturday March 30, 2019.

Minister of Sports Olivia ‘Babsy’ Grange and Keith Wellington, president of the Inter-Secondary Schools Sports Association (ISSA), have described the decision to cancel this year’s ISSA/GraceKennedy Boys and Girls’ Athletics Champion­ships as a massive disappointment, with Wellington pointing to a $40-million loss in revenue for his organisation.

The decision was taken following a meeting involving officials from ISSA, the Ministry of Health and Wellness, the Ministry of Education, and title sponsors GraceKennedy as the country confirmed its second case of the deadly coronavirus yesterday.

“It is a massive disappointment. We are all disappointed because it is very painful for me, but when you think of reducing the risk, then that is more important than ­fulfilling our wish to have a ­fantastic Boys and Girls’ Championships,” said Grange.

“I just want to say to the athletes that it is in their best interest and I know how disappointed they are, and I am disappointed, too, but they should continue to remain focused,” Grange added.

The sports minister underlined that no consideration was given to the prospect of changing the date of the championships or staging the event without spectators.

“We didn’t discus moving the date, and we didn’t discus having it without spectators. We felt that in order to focus on containment and protecting Jamaicans, we thought that spectators and the athletes were equally important,” Grange added.

With Champs being the main revenue source for ISSA, allowing it to fund other events and sporting activities, Wellington described the development as a massive blow to the organisation’s coffers.

“I think after we would have covered all our expenses, we possibly would be losing upwards of $40 million dollars,” said Wellington.

“It is our major revenue earner, and as a matter of fact, this is the only sponsored competition that we have a surplus from after we cover all our costs,” Wellington shared. “That $40 million dollars is what we use to cover the other sports that are not sponsored as well as our office operations.”

He noted that although they are disappointed with the cancellation of the event, his organisation understands the circumstances surrounding the move.

“It is a disappointment that we had to take this decision, but I think it is the right decision that we would have taken based on the circumstances,” Wellington said.

The Champs cancellation is expected to effect hundreds of millions in losses to the wider industry when hotel accommodation, advertising, sponsorship, gate receipt, related spend, and other elements are considered.