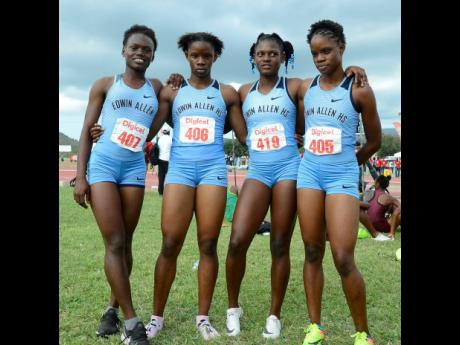 There’s always a story behind the numbers in the record books. The insight can reveal why some records last and last and last, and others go before the ink dries. In years to come, some sage may explain how the coronavirus saved two Penn Relay records in 2020. If they don’t, the numbers will simply smile off the page.

One of the lucky records is obvious. Last year, a youthful Edwin Allen High quartet blasted the Relays 4x100m record to 43.62 seconds. Serena Cole, Kevona Davis, Tina Clayton and her twin Tia, damaged the old mark of 43.96, which was set by the 2017 Edwin Allen team. Given that all four are back, expectations were high.

The 2019 Western Relays saw a Edwin Allen team, including Davis, set an all-time Class Two record of 43.91 seconds. That has been surpassed twice this year by Cole, Tia, Brandy Hall and Tina and now stands at 43.73 seconds. Fully peaked, they might even be able to reach the Penn Relay record without Davis.

Add the 2017 World Under-18 100 metre bronze medallist, say some experts, and Edwin Allen could reach the World junior record of 43.29 seconds.

That possibility is on everyone’s radar. It’s not so obvious that Calabar High School has the ammunition to chase the Penn distance medley relay (DMR) record off the books. Jamaican schools seldom run the event anywhere and at Penn, the focus is on the 4x800 metres. This visit to historic Franklin Field, the home of the Penn Relays, could have been different.

In their current form, Marshall and Venson could keep pace with the record on the longer legs and as reigning Penn 4x400m champions, Calabar could find someone who could circle the track much faster than 51 flat. In that schematic, Farquharson is the key man. At his best, he has produced a 8000-metre relay leg of 1 minute 47.9 seconds.

Venson and Marshall ran 1500-metre personal bests of 3.52.81 and 3.53.44 at last weekend’s Carifta Trials. By Penn, if they were to hold that form or improve, they would give Calabar a chance to make history. No school has held the Penn records at 4x100m, 4x400m, 4x800m and distance medley at the same time; Calabar already has the other three.

This is Farquharson’s last year at Calabar and no one knows when his team will have someone who can run the 800 in 1 minute 48.67 seconds as he did at Boys and Girls’ Championships last year. In addition, the window of opportunity could close for any number of reasons.

If the health challenge allows us to stage the Jamaica Invitational or the Racers Grand Prix, it would be great if the girls’ 4x100m and the DMR were placed on the schedule of either or both meets so Edwin Allen and Calabar could show what they can do this season.

Otherwise, track stat geeks will look at the record book in years to come and wonder just how those marks lasted so long.

Hubert Lawrence has been scrutinising local and international track and field since 1980.