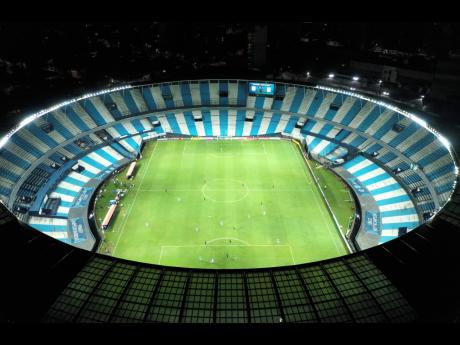 (AP Photo/Gustavo Garello)
Peru’s Alianza Lima and Argentina’s Racing Club play a Copa Libertadores match at Estadio Presidente Peron in Buenos Aires, Argentina, on Thursday, March 12, 2020. The match was played in an empty, closed door stadium as part of the government’s measures to contain transmission of the novel coronavirus.

“I was really surprised with President Infantino’s comments. This is not a moment to talk about planning. Right now, we have to prioritise health above politics,” Alejandro Dominguez said in an interview with The Associated Press. “We have to talk about how we can help players, the clubs, and the member federations.”

Dominguez was responding to Infantino’s comments in an interview with Italian daily Gazzetta dello Sport published on Monday. With football stopped around the world because of the coronavirus pandemic, the FIFA president warned football risked going into recession and the future could mean fewer games and top competitions.

“I think it’s ill-timed,” Dominguez said. “ … It’s a debate that we should have in the long run. The priority right now is to have solidarity to get by in the current situation.”

CONMEBOL announced on Thursday it will offer to the clubs playing in its two main competitions – the Copa Libertadores and Copa Sudamericana – an advance of up to 60 per cent of their prize money, so they can manage to remain solvent during the crisis.

The Libertadores was halted on March 12 after the second round of group matches, as COVID-19 hit South America. CONMEBOL also postponed the start of World Cup qualifying in the region.

Dominguez told AP that CONMEBOL has asked FIFA to add a window for qualifying matches in April next year.

“Our proposal is to allow us to make changes and be flexible with the FIFA calendar, in order for CONMEBOL to extend its qualifying to those dates,” Dominguez said.