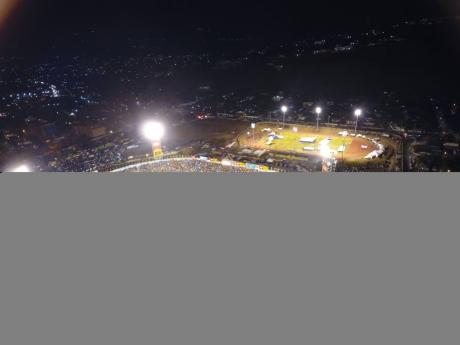 Raymond Simpson
FILE An aerial shot during the final day of activities at the ISSA/GraceKennedy Boys and Girls’ Athletics Championships at the National Stadium in Kingston on Saturday, March 30, 2019.

General manager of Independence Park Limited (IPL) Major Desmon Brown says his organisation is projected to lose more than $100 million due to the closure of sporting facilities to mitigate the spread of COVID-19.

Jamaica now has 55 confirmed COVID-19 cases. Seven persons have recovered while there have been two deaths (a third is under investigation).

IPL, which operates the National Stadium complex and the Trelawny Multipurpose Stadium, has seen a number of scheduled events cancelled due to the outbreak of the disease, with the largest being the ISSA/GraceKennedy Boys and Girls’ Championships. IPL was expected to earn between $13-15 million during the five-day staging of the high schools athletics championships. The National Senior and Junior Championships as well as the Jamaica International Invitational were some of the other major events that were scheduled for the National Stadium in the first six months of the year.

“Our biggest loss was Champs because that is our biggest event for the year, and we have quite a number of other events that have been cancelled,” said Brown.

“This is actually our busiest period. From January to June is where we collect 60 per cent of our income, and so it’s significantly affecting our income [stream],” he said.

Brown continued: “Our income for events in this period is more than $100 million from all the facilities.”

He noted that it is costing the IPL $26.2 million per month to maintain the facilities.

Brown underscored that if this situation continues, then the state-run entity may have to seek government assistance to cover some of their expenses.

“If it lasts very long, then we are going to have to ask the Government for some assistance to cover some of our costs,” Brown said.

“For instance, the security cost doesn’t change (when venue is not in use),” he said, adding that their revenue is used to cover the cost of security. He noted that there are also other fixed costs, which include utilities such as electricity and water.

However, despite the current financial difficulties facing his organisation, Brown said that there are no plans to lay off any of the more than 30 staff members.

“No, there are no plans to cut any staff member because although we are not having any events, we have to water the fields, and so our maintenance is still ongoing,” Brown said, adding that the office staff is rotating.

IPL already gets some money from Government to cover some its overheads.

“The subvention that we get from the Government covers the staff and it covers some amount of the utilities” Brown pointed out.