‘Stupidness!’ - Jack Warner hits back at new corruption charges against him 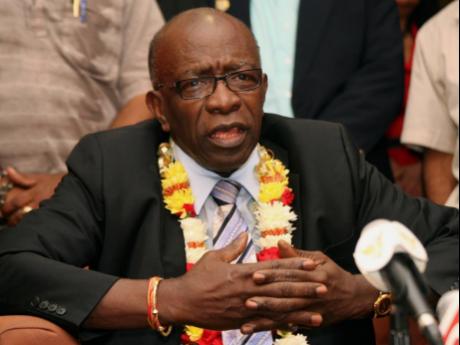 FORMER FIFA Vice-President Jack Warner has dismissed as “stupidness,” new charges surrounding his alleged acceptance of US$5 million (J$677 million) in bribes in relation to World Cup voting and the sale of media and broadcast rights.

A 53-count indictment unsealed Monday in the US District Court in Brooklyn alleges that while serving as Caribbean Football Union (CFU) president and acting as a special adviser to the Trinidad and Tobago Football Association, Warner solicited bribes for the award and execution of contracts for the rights to the CFU World Cup-qualifing matches, relating to the 2006 showpiece in Germany.

It is also alleged that he received kickbacks from helping South Africa land the continent’s first-ever World Cup in 2010, and for helping Russia win the bid to host the 2018 showpiece.

But responding to questions from the Trinidad Newsday newspaper on Monday evening, the 77-year-old Warner was dismissive of the legal development.

“You really want me to answer that stupidness? I have no comment to make on that. That is still news?” he said.

Asked if he wished to deny the allegations, the former head of continental governing body, Concacaf, replied: “If allyuh want to be messengers for the US, go ahead. I have no problem with that.”

Warner further indicated that he was “not interested in that”, when asked if he would be prepared to fight the legal battle.

The latest charges come five years after Warner was named in a similar US Department of Justice indictment.

In 2015, he was charged with wire fraud, racketeering and money laundering, but has been engaging the courts here to avoid extradition to face those charges. That same year, Warner was slapped with a lifelong ban by FIFA for “many and various acts of misconduct”.

The indictment states that Warner and the others conspired to use their positions “to engage in schemes involving the solicitation, offer, acceptance, payment and receipt of undisclosed and illegal payments, bribes and kickbacks”.