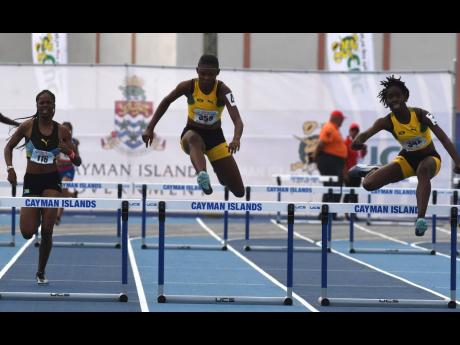 File
Jamaica’s Sashell Reid (centre) and Quaycian Davis (right) storm by the Bahamas’ Reshae Dean on their way to gold and silver, respectively, in the Girls Under 17 400m hurdles final at the Carifta Games, in the Cayman Islands on Sunday, April 21, 2019.

After being suspended because of the outbreak of the novel coronavirus which began last month, the 2020 Carifta Games have now been cancelled. The impact on the host country, Bermuda, and other Caribbean territories, repercussions for international travel, regional school schedules and on the ability of athletes to train were among the reasons cited.

In a letter from North America Central America and Caribbean (NACAC) athletics federation President Mike Sands, it was indicated that Bermuda will host the Games in 2021.

The move followed similar action by NACAC’s parent body, World Athletics, which moved the 2020 World Under-20 Championships into 2021. That event was set for Nairobi, Kenya, in July.

“The Executive therefore agreed to have me, in my capacity as President, engage in discussions with our member federation in Bermuda, the government of Bermuda, the National Olympic Committee (the local representative of Pan American Sports) as well as sponsors of the Games of 2020, to ascertain their thinking in respect of the postponement of the Games to Easter of 2021,” Sands wrote in a letter appearing on the NACAC website on Tuesday.

Bermuda holds a special place in Games history as it is the only host nation to witness a world junior record at Carifta. Usain Bolt of Jamaica became the first under-20 athlete to run the 200m faster than 20 seconds in 2004. Destined to become the best sprinter of all time, Bolt stopped the clock in Hamilton, Bermuda, at 19.93 seconds. No other runner in the under-20 age category has ever broken the 20-second barrier.

This is the first postponement in Carifta Games history.

- the impact on government and private sector plans and budgets for 2020 and perhaps beyond, uncertainty in respect of the reconvening of international travel