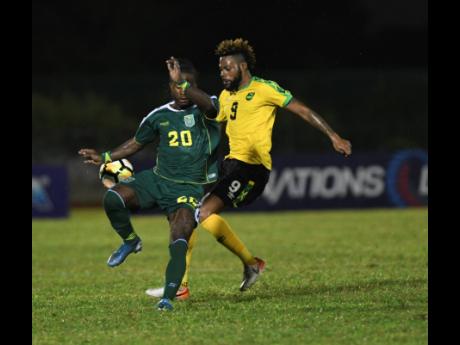 Ricardo Makyn
Jamaica’s Ricardo Morris (right) gets up close with Guyana’s Trayon Bobb to make a challenge during their Concacaf Nations League match at the Montego Bay Sports Complex on Monday, October 18, 2019. Social-distancing protocol requires persons to stay at least three feet away from each other to help curtail the transmission of COVID-19, posing questions for the resumption of contact sports such as football.

It has been roughly a month since most major sporting events around the world have been either suspended, postponed, or cancelled because of the novel coronavirus (COVID-19) pandemic. In that time, fans, athletes, and sports administrators alike have speculated about when their favourite competitions would return.

Events such as the Caribbean Premier League, Concacaf World Cup Qualifying, and the JAAA National Championships, are eyeing activity late in the summer although their organisers have said that they understand that these provisional dates could change, depending on what happens with the pandemic.

In the United States, president Donald Trump recently met with administrators of that country’s major sports leagues and told them that he wants their competitions to be back to normal activities by August. Track and field’s global governing body, World Athletics, shares similar sentiments to Trump about August activity as it has advised its member nations that it has set aside the weekend of August 9-10 as the protected window for worldwide national championships.

But sports physician Dr Akshai Mansingh says such an expectation may be unrealistic.

“All of this is speculative on when we do flatten the curve,” he said.

‘Flattening the curve’ means staggering the number of new cases of COVID-19 over a longer period to put less strain on medical resources. But Mansingh says that Jamaica’s hopes of this were dashed because of the 52 new cases found at Alorica, a call centre in St Catherine, and the migration of residents of the parish to Kingston and St Andrew to avoid the subsequent lockdown announced by the Government.

“The curve just got raised yesterday, not flattened,” he said. “It got raised by two things. One was the call centre discovery, and the second was a mad evacuation of Portmore last night (Tuesday) by people who have potentially spread the disease into Kingston. If that happens, forget sports for whatever period.

“If we look at examples from around the world, take the IPL (Indian Premier League), for example. It had postponed until May, speculating that the curve would’ve flattened, and today, they’ve all but cancelled it.”

Mansingh says resuming sports this summer is contingent on the threat of the spread of the virus being eradicated and that there is no resurgence of it.

“You cannot have sport without social distancing unless you’re playing something like chess,” he said. Therefore, realistically, you’re not going to be able to start anything unless the threat of contamination is gone.”

He says that if immunity to the virus is achieved, there could, however, be a resumption of sports. However, it could only be done in one of two ways.

“One is by contracting the disease and building antibodies. The other is by the administration of a vaccine,” Mansingh said. “With an infection, it only pounces on somebody if the environment is correct, if the virus is very strong, and if the host is very weak.

“If the environment is not conducive to the infection, then the infection rate will go down. Also, if the host builds immunity, the infection rate will go down. Building immunity means people getting the disease and creating antibodies or using a vaccine. That’s gonna take at least a year, or year and a half. But what may happen before that year or year and a half is that you may have environmental conditions coming in and suppressing the disease. So if, for example, you have people saying the virus does not thrive in hot climates, then maybe you’ll find that in Jamaica, we can start back sports when it gets much hotter. But then, we may have to brace ourselves for next year, when it gets cooler again. At that stage, hopefully the vaccine is developed.”