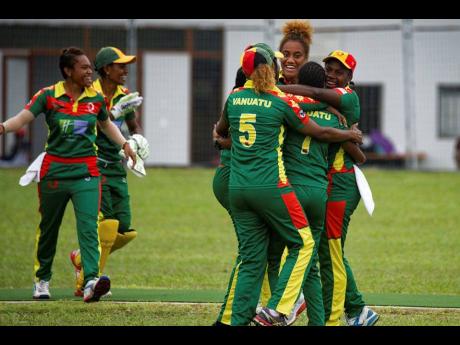 AP
In this May 2019 photo, provided by the Vanuatu Cricket Association, players celebrate during a women’s cricket match in Port Vila, Vanuatu.

The tiny islands in the South Pacific were the only venue in the world hosting a competitive sports final yesterday, as most international sports remain shuttered.

Vanuatu Cricket Association chief executive Shane Deitz invited anyone missing real-time action to tune in to a live stream of their women’s club championship finals. And Deitz said there were 350,000 views of a men’s 10-over exhibition match followed by the women’s Twenty20 final won by the Mele Bulls, who went undefeated in the four-team competition.

The matches were played at the Vanuatu Cricket Grounds in the capital Port Vila, on the island of Efate. Deitz said national broadcaster VBTC set up four cameras for its first-ever live cricket show, and he helped with the commentary for the online stream on Vanuatu Cricket’s Facebook page.

The commentators had a bit of fun as well, with one of them suggesting the few fans were getting rowdy “now that the red wine has kicked in”. Play was delayed for a minute or two when a few children ran on to the field, and the commentators apologised for not having many security people at the ground.

Vanuatu, population 300,000, went into lockdown last month as a precaution because of the pandemic, and was then hit by a destructive cyclone on April 6. Spectators who came to the ground on Saturday were asked to bring food or clothing donations for those affected by the cyclone.

The lockdown and closed borders meant there were no reported cases of COVID-19 in Vanuatu.