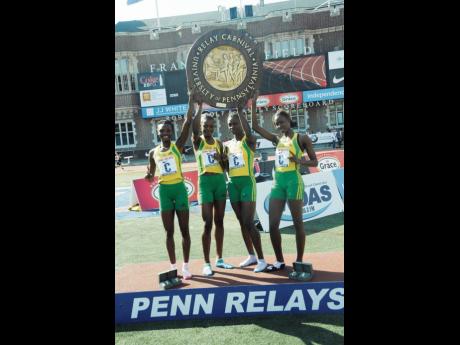 This past Saturday should have been the final day of competition at the 126th staging of the Penn Relays at Franklin Field in Philadelphia, Pennsylvania. However, the most popular relay event in the world failed to get off the ground as it became one of the sporting casualties of the coronavirus pandemic, which has stalled sporting events globally.

Over the years, the meet, especially among high school teams, has been dominated by the Jamaicans. The Jamaican teams have been so dominant that organisers have awarded the same prize of commemorative Penn Relay watches, and a big plaque to the first American high school team to finish behind a Jamaican team.

While of late we have seen the exploits of Holmwood Technical High School and Edwin Allen High School girls shining as Jamaican teams, undoubtedly the most dominant team at the carnival is Vere Technical High School. The team out of Hayes, Clarendon, has left an indelible mark at the meet. Once the local female high school queens of track and field, winning 21 ISSA/GraceKennedy Girls’ Athletics Championships title, including 14 in a row from 1979 to 1993, they took that dominant form to the Penn Relays.

The school, which has also produced the most female Olympians for Jamaica, including Merlene Ottey, Deon Hemmings-McCatty, Beverly McDonald, Veronica Campbell-Brown, Merlene Frazer, Aleen Bailey, and Shericka Jackson, have set the bar high at Penns. They have captured a total of 39 Championship of America titles, with their first win coming in 1979 in the 4x100m event, with a team anchored by Ottey, and their last coming in 2013 in the 4x400m, where Jackson ran the anchor leg.

They are the only team to win four Championship of America relay events at one meet after doing so in 1991, after capturing the 4x100m, 4x400m, 4x800m and distance medley, the only Jamaican high school female team to win the latter at the meet. Possibly their greatest performance at the carnival also came that year as a 4x800m quartet which consisted of Charmaine Howell, Claudine Williams, Janice Turner, and Inez Turner-Gray romped to an impressive world junior record of 8:37.71 minutes. The highlight of that run was an amazing 800m split of 2:03.20 minutes by Inez. Incidentally, that record run still stands and is the oldest high school carnival record.

Of the relays, which they have dominated, only Holmwood Technical have gone better than them in one. With 15 wins, they are atop in the 4x100m, while they have gone 11 in the 4x400m, and six in the distance medley. They have seven wins in the 4x800m but Holmwood, with 11 victories, are the best here.

With the dominance of Vere now seemingly over, it will be interesting to see if either Holmwood or Edwin Allen, their closest in number of titles won, will surpass them in the future. Holmwood, with 21 titles, are 18 shy of Vere, while Edwin Allen are on 19, and it looks like another decade if any of the two are to overhaul the queens of Penns.