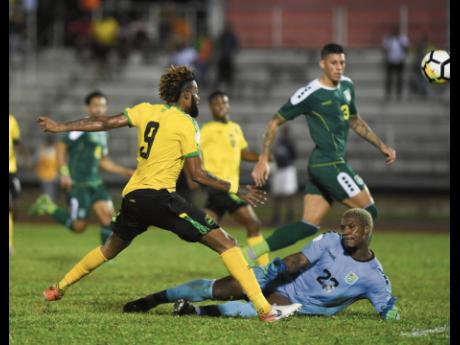 File
Jamaica’s Ricardo Morris (left) has an opportunity on goal as Guyana goalkeeper Quillan Roberts (on ground) rushes out during their Concacaf Nations League game at the Montego Bay Sports Complex in St James on Monday, November 18, 2019.

Jamaica Football Federation (JFF) general secretary Dalton Wint has commended the move by world governing body FIFA to waive administrative restrictions on member associations. He has also praised FIFA for advancing the US$500,000 (over J$70 million) entitlement for each association, along with other payments due.

FIFA’s 211 members are entitled to US$6 million (over J$844 million) from the organisaton, spread over the four-year World Cup cycle. The next instalment, which comes in two parts annually, was due in July. However, because of the COVID-19 pandemic, member associations will now be paid in the coming days, along with other payments due from last year. Wint believes that FIFA has done the morally correct thing under the current circumstances.

“It is commendable,” he said. “This is how a parent should take care of their children. In times of need, they should double up their efforts to give support, and the [FIFA] president (Gianni Infantino) has always said ‘it’s not FIFA’s money, it’s the MAs’ (member associations’) money’, and that is the key behind this philosophy, that the money should be spent on the sport.”

Infantino said that the pandemic has caused unprecedented challenges for the entire football community and that it is FIFA’s duty to support those in need. He said the body would start by providing immediate financial assistance to member associations, many of which are experiencing financial distress, as the first step of a far-reaching financial-relief plan and response to the emergency across the football community.

“Together with our stakeholders, we are we assessing the losses, and we are working on the most appropriate and effective tools to implement the other stages of this relief plan,” said Infantino, who previously said that FIFA would make a sum of US$2.7 billion (J$380 billion) in reserves available in an emergency fund.

Although the US$500,000 will help the federation maintain and cover operational costs during the financial crunch, Wint says that it does not complete the JFF’s budget for the year, which usually runs into over U$2 million (J$282 million) when there are no FIFA World Cup qualifiers but normally doubles or triples during a World Cup qualifying year.

“It’s important; an advance is something that every MA is entitled to,” Wint said. “We would have gotten half of it at the start of the year, but for them to get the other balance, they need to have certain processes and criteria and have certain things in place. For each category, you can have another US$50,000 (J$7 million); that adds up to the US$500,000.”