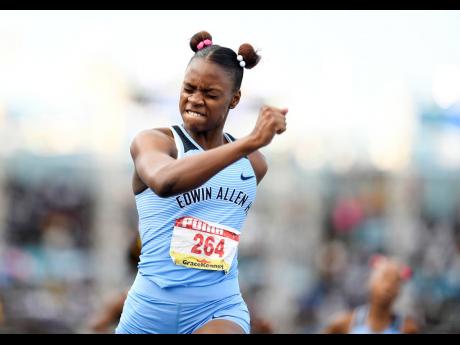 Since telling The Gleaner a few weeks ago that she would not return to Edwin Allen High School for her final year of eligibility at the ISSA/GraceKennedy Boys and Girls’ Athletics Championships, there were many questions being asked as to whether Kevona Davis would go professional or choose university instead.

The million-dollar question was answered yesterday as Davis, 18 years old, accepted an offer from American Division 1 school, the University of Texas in Austin, also known as the Longhorns. There, she will pursue a bachelor’s in psychology.

“I feel great in signing for the University of Texas as I had done my research in the past, and this was the school of my choice. This is a dream come true for me,” she said minutes after making her decision. “Despite what people were thinking, I really had my mind set on continuing my academics and was not thinking about going professional because I always wanted to get a degree.”

“I am confident that I have made the correct choice, and I am hoping to help with the continuation of the excellence of that rich school-athletics programme.”

Davis will join former Vere Technical quarter-miler Sanique Walker; former St Elizabeth Technical High School quarter-miler Stacey-Ann Williams, who had a two-year stint at junior college at the University of New Orleans (SUNO); former Cornwall College sprinter Washington Brown; and O’Brien Wasome, formerly of Jamaica College. Wasome is a senior but will spend an additional year at Texas because of the cancellation of the NCAA Championships because of the COVID-19 pandemic.

HAPPY ABOUT THE ADDITION

University of Texas track and field and cross country head coach Edrick Floréal is happy to have Davis join the school.

“We are very excited about the signing of world-class talent Kevona Davis,” he said. “We are looking forward to her arrival and believe she will fit in well with our current student athletes and the university.”

“Congratulations to Kevon!” he said. “I believe it is the right place for her since she decided to study abroad. She will surely be missed because she has been with us since she was 11 years old, but I wish her all the best, and I am confident that with her level of discipline and commitment to the sport and her academics, she will do well.”

Davis has a season’s best time of 11.35 seconds and 22.86 seconds in the 100m and 200m, where she is ranked number two and one, respectively, among juniors this year, with Edwin Allen teammate Tia Clayton (11.29 seconds) ahead of her in the former.