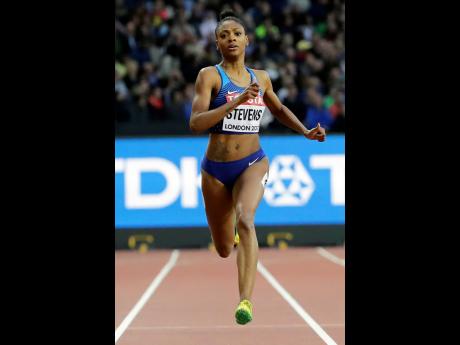 AP
In this August 8, 2017, file photo, United States’ Deajah Stevens races in a women’s 200m first round heat during the World Athletics Championships in London.

Athletes are required to provide regular updates on their whereabouts to make it possible for anti-doping authorities to carry out surprise testing outside of competition. A violation means an athlete either did not fill out forms telling authorities where they could be found, or that they weren’t where they said they would be when testers arrived.

The AIU said similar suspensions were imposed on American sprinter Gabrielle Thomas and Kenyan distance runner Alex Korio Oliotiptip. It didn’t specify when or where the violations occurred.

World champion sprinter Christian Coleman was cleared of a whereabouts charge last year. One of the American’s alleged violations was backdated, putting it outside of the required 12-month window for three strikes.

Also Friday, the AIU said Kenyan runner Mikel Kiprotich Mutai, the winner of the Hong Kong Marathon in 2016, was suspended after testing positive for the banned substance norandosterone.