Protest at Caymanas Park - Stakeholders call for resumption of racing 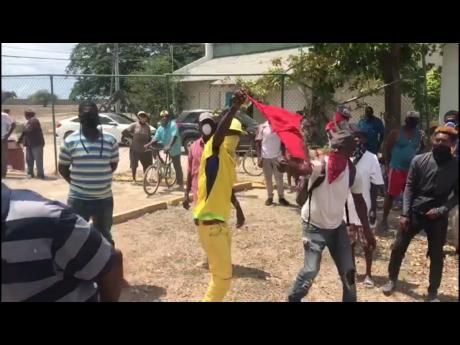 Contributed
Grooms protesting at the gates of Caymanas Park yesterday.

Dozens of trainers, jockeys and grooms staged a protest outside the gates of Caymanas Park yesterday, calling for horse racing to resume at the island’s only track.

Some of the angry protesters also burnt T-shirts with the logo of Supreme Ventures Racing and Entertainment Limited (SVREL) while demanding that the promoting company do more in its power to ensure that racing resumes very quickly.

“They could put measures in place to make racing run like how racing is running at Gulfstream, and, by May 16, racing will be running at Churchill Downs,” he said. “Cash Pot running now and you still have to join lines to buy Cash Pot and all those things. So why racing can’t run?” he asked.

Resumption of racing is not solely in the hands of the promoters. They will need to get the go-ahead from the Jamaica Racing Commission (JRC). Last Sunday, chairman Clovis Metcalfe said his organisation will be moving very swiftly for the resumption of racing, once the lockdown in St Catherine is lifted by the Government. That lockdown ended on Friday.

“St Catherine is on lockdown and, once the lockdown is lifted, then the regulators will get together with the promoters to see how best we can resume racing, because all of us want racing to resume at the earliest,” Metcalfe said last week.

The protest comes on the heels of the SVREL’s decision to scale down operations at the track to four days only, from Monday to Thursday.

The company said that it had to take this decision because of what it describes as “severe disruptions and the immense impact” of the novel coronavirus on the country’s economy, in particular, St Catherine.

Champion trainer Anthony ‘Baba’ Nunes, who also attended yesterday’s demonstration briefly, told The Sunday Gleaner that the protest has brought to light some of the issues that have been affecting the horsemen since the suspension of racing in late March, because of the COVID-19 pandemic.

“When you have protests, then it means there is unrest, there is unhappiness, there is no clarity, because SVREL refuses to say anything other than racing is closed indefinitely,” said Nunes.

“You have a country that looks like it is moving towards trying to open up back the economy and move us forward, yet they (SVREL) are showing us signs of going in the opposite direction,” he said. Nunes, who won his first trainer’s championships last year, called on the Government to intervene in the matter very quickly.”

Nunes added that the scaling down of operations at the track by SVREL will have a negative impact on the horsemen.

“What you are doing is that you are telling the stakeholders, especially the owners, that there is no racing in sight. Do you think they are going to continue to pay to keep the horses here? No! They are going to either give them away or turn them out on farms, and some of the farms can only take so many horses. No farm is going to take my 73 horses.”