Floréal has big plans for Davis 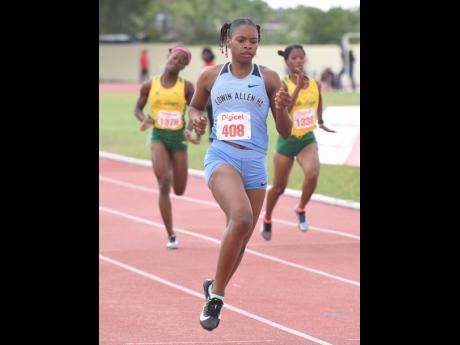 Davis, the Edwin Allen High School sprinter, accepted an offer of a full athletics scholarship from the ‘Longhorns’ on Wednesday and will pursue a bachelor’s in psychology.

“My wish is for Kevona to be a healthy and happy, young college student and for her to enjoy a pressure-free environment where she can grow, learn, and develop,” Floréal told The Gleaner.

Davis has a personal best of 11.16 seconds in the 100m sprint, and 22.72s over 200m, which were attained at the ISSA/GraceKennedy Boys and Girls’ Athletics Championships while competing in Class Two in 2018. Floréal says she has potential for improvement.

“We are planning on working on her strength and technique to get her marks to improve,” he said. “Training with sub-11-second sprinters, a world-record holder, and a former world champion will help.”

Among her future training partners is Teahna Daniels, who was a women’s 100m finalist at the World Athletics Championships in Doha, Qatar, last year. Kori Carter, the 2017 400m hurdles world champion, and Kendra Harrison, the women’s 100m hurdles world record holder, will also train with Davis.

Many were surprised by Davis’ decision as it was believed that the 18-year-old would have gone professional like her compatriot, Briana Williams, who is only younger than her by three months. This was further justified when Davis said in an episode of The Commentators podcast last month that going to MVP Track Club with coach Stephen Francis might be a good thing.

“It would be good for me, good for my talent, and I think I would achieve a lot out of that programme,” she said.

Floréal is happy with her final decision.

“I applaud Kevona for making the best choice for her instead of doing what people think she should do. Let’s look at the total number of high schoolers who have gone pro and compare with the very few who actually succeeded,” he said.

Davis has, however, had injury concerns while at Edwin Allen, but Floréal says he is already making plans regarding her fitness.

“It’s my job to worry about my student-athletes, but it’s also my job to plan and address the issues before they become a problem,” he said. “I’m confident that our support team, made up of many physicians, nutritionists, strength and conditioning coaches, and sports psychologists, will again prevail in making sure she is healthy and stays healthy.”