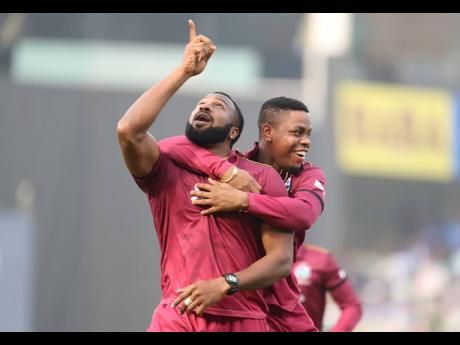 REIGNING TWENTY20 (T20) world champions, the Windies, have moved up to ninth in the International Cricket Council’s (ICC) rankings, gaining one place after sitting in 10th for several months.

Though there has been a cessation of all cricket globally because of the novel coronavirus pandemic, the ICC revised the rankings to eliminate results from the 2016-17 period.

As a result, Windies gained three points from the ICC update to move to 229 points, while Afghanistan dropped five points to slip to 228 points, and down to 10th in the rankings.

After a run of bad results, the Windies found their best form last March, beating Sri Lanka 2-0 in a two-match series in Pallekele, Sri Lanka.

However, the series win was only the Caribbean side’s second in 10 outings, a run of form which had led to their steady slide down the rankings.

In fact, since their capture of the T20 World Cup in India four years ago, Windies have won just four of 15 series, excluding one-off matches.

For their part, Afghanistan have won their last six bilateral series, including a 2-1 verdict in a three-match series against the Windies in India last November.

Australia, meanwhile, have climbed to the top of the T20 standings for the first time since they were introduced in 2011, with England moving into second spot, and India assuming third position.

Pakistan, who spent the last 27 months at the top, have moved to fourth.

The T20 World Cup is to be played in Australia from October 18 to November 15, but could be scrapped as the world remains in lockdown because of the COVID-19 outbreak.