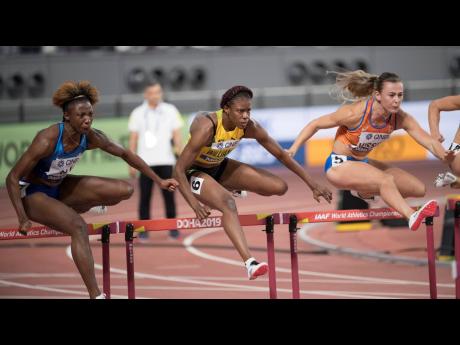 Gladstone Taylor
Jamaica’s Danielle Williams (centre) is flanked by Nadine Visser (right) of the Netherlands and eventual champion Nia Ali of the USA during the first semi-final of the women’s 100m hurdles at the World Athletics Championships in Doha, Qatar, on Sunday, October 6, 2019.

LIKE EVERYONE in athletics, star sprint hurdler Danielle Williams is twiddling her thumbs while she keeps safe from the novel coronavirus. However, while she waits, Williams is looking forward to intense competition in 2021, 2022 and 2023.

In a recent interview with Stuart Weir for the respected British journal Athletics Weekly, Williams examined how the virus has shifted the international competition schedule.

Despite the uncertainty, the 27-year-old, who lowered the national 100m record to 12.32 seconds last year, is hoping for the best.

“The positive and exciting thing is that, coming up, we’re going to have intense competition year upon year,” she said. “In a sense, everyone is getting a break this year and will be coming back next year.”

NOT ABLE TO TRAIN

But Williams isn’t so gung-ho about a late season in September or October.

“I’m not sure that would make sense at this point, because I and other athletes are not able to practise at the moment, and for an event-specific person like me, I need a track, blocks and hurdles to prepare to compete at this level.

“The facility where we normally train closed on March 12,” she said, when explaining how she is affected by coronavirus restrictions. “We found a public track where we were continuing to practise, but once they issued the notice of no public gatherings of more than three people, training pretty much came to a standstill. I work out in a group of seven – five athletes and two coaches. So the only way we could make it work is if we went out two athletes at a time, but I’m a hurdler and we compete with each other – that’s how we give our best in practice. So once the Olympics were cancelled, coach said, ‘Stay safe. Stay inside, and once everything blows over we will try to pick it up again’.”

Understandably, the Lennox Graham-coached hurdler is taking a wait-and-see approach.

“We will have lost months of conditioning, so I’m not sure how much sense it would make to have meets, even at a later date,” she said. “But if they do, then it’s our job to get into the best shape possible, as quickly as possible.”