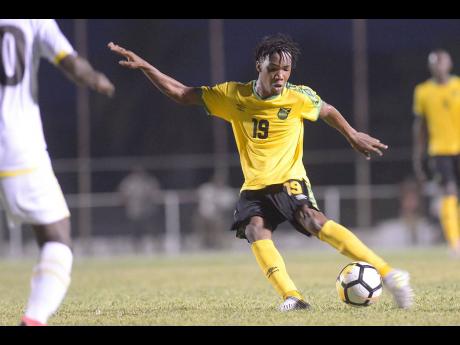 Former Harbour View FC midfielder Tyreek Magee says it is only a matter of time before he breaks into the starting team at Belgian first division football club K.A.S. Eupen. But the 20-year-old, who has been at the club since last summer, says he has to continue to make improvements to his game to do this.

Magee was speaking on Harbour View’s My Football Journey on Instagram yesterday and said he believes that he has been doing very well in training, and he is confident that he will get his opportunity soon.

“On a daily basis, I have been able to make a good account of myself,” he said. “Whenever I go down to play with the second team, I score and assist, and I have been in the newspaper multiple times, so I think it is just a matter of time before I make my break into the first team. I have been playing good, training good, and doing everything in my power that I can do.”

He said that adjusting to the weather as well as playing without the ball have been the most difficult things for him.

“I had been in the cold before but not for so long, so it’s very challenging and very difficult to play in the cold, but I am adjusting,” he said.

“The tactical side [of my game] is what they have been helping me with and my weaknesses. The style of play is totally different from when I was at Harbour View. It is not a team like Harbour View that tries to keep possession. It is a counterattacking team, but it’s a plus for me because it helps me to learn to play without the ball.

“When I just arrived, it was a bit difficult because normally, I have the ball a lot, but when the team gets the ball, it goes direct, and I liked to be the one making the passes, so that was one of the things I had to adapt to, but now it’s good.”

Magee says he also dreams of playing for the senior men’s national team and helping the team to qualify for the 2022 FIFA World Cup.

“After the ‘98 World Cup campaign, everything died out,” he said. “So now is the right time, and it is very possible right now to make it to a World Cup. I think that is the main goal, not only for me, but all the players.”