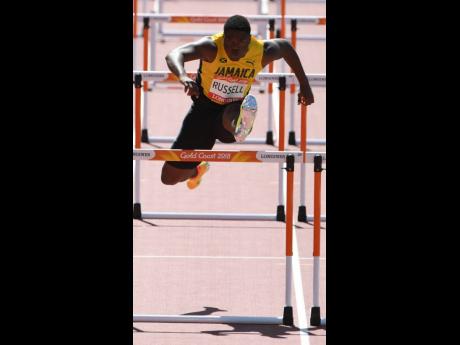 Outstanding as a schoolboy hurdler, Dejour Russell says training with the accomplished Hansle Parchment is helping him through his first year as a senior athlete. Russell is grateful and is working patiently to his ultimate goal – a medal in the 110m hurdles at the highest level.

With high school behind him, Russell has settled into the group coached by veteran Fitz Coleman at The University of the West Indies. Now he trains with Parchment, the nation’s first Olympic and World Championship medal winner, every day.

Parchment’s advice has been invaluable.

“I’m grateful to be right beside him in training,” Russell said.

Training is a bit different than it used to be.

“It’s nothing like high school,” Russell said. “It’s more commitment. It’s more disciplined and I can say you have to be a lot more focused. So it’s going good.”

Russell won the sprint hurdles in Classes One, Two, and Three for Calabar High School at the ISSA/GraceKennedy Boys and Girls’ Athletics’ Championships, garnered gold at the 2017 World Athletics Under-18 Championships, and reached the Commonwealth Games final in 2018. Understandably, his goals for his senior career are lofty.

“We have a lot of objectives but let’s not say too much,” he said of the road map coach Coleman has laid out for him. “Let’s try and shock the world, because I can tell you we’re working on a lot of things. We’re working on flexibility, endurance, and technique, and I’m getting on really well.

Russell won the Class Two 110m title in 2015 and is eyeing a return to sprinting some day.

“That’s definitely in the mix,” he said. “Hurdling is my passion and I really want to win a world medal in the hurdles before I venture off into the sprinting,” Russell said.

He is philosophical about the way the COVID-19 outbreak has affected the 2020 season.

“It really has been hard because we as athletes were looking forward to this season and you know, God had other plans,” he said. “We just have to work with what’s going on and just come back stronger next year.”