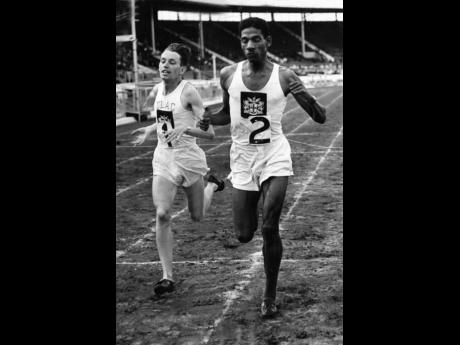 BORN ON May 25, 1920, 100 years ago today, Arthur Wint compiled an immense body of work on the track. He is known especially for being Jamaica’s first Olympic gold medallist, a milestone he attained in the 400m, but he was so good at both that distance and the 800m that he would still have been a star had he chosen to specialise in either one of them.

The tall Plowden, Manchester native helped to establish the 400m as the quintessential Jamaica track event. Wint and world-record breakers Herb McKenley and George Rhoden ruled the world over the one-lap distance for the best part of a decade. His stunning upset in the 1948 final was achieved in the Olympic record-equalling time of 46.2 seconds. McKenley had gone out hard, but Wint’s nine-foot strides devoured Herb’s advantage and swept him to the top of the podium.

The 46.2s made Wint the second-fastest Jamaican of all time, and even though subsequent generations of 400m runners had the benefit of helpful synthetic surfaces, Wint remained in the Jamaican all-time top 10 well into the 1970s.

Remarkably, Wint had run three rounds of the 800m before the 400m preliminaries.

He missed a medal when he returned to the final at the 1952 Games in Helsinki, Finland, when Rhoden and McKenley went one-two but still achieved a rare honour. Before then, only two men had reached back-to-back Olympic 400m finals.

The gold he won in the 400m was his highest individual honour, but he was just as good in the 800m. He twice won Olympic silver behind fierce rival Mal Whitfield of the United States. Ironically, the 1948 and 1952 finals feature similar tactics. In each case, ‘Marvellous Mal’ was able to stave off the strong finish by Wint.

As a punctuation mark to his double silvers, only one other Jamaican man, 1960 bronze medal winner George Kerr, has even reached an Olympic final.

The proof is incontrovertible. Wint did enough in each of his events to be great, and his ability to double successfully makes him exceptional. It took Cuban hero Alberto Juantorena to surpass Wint’s 1948 gold and silver medal haul with a majestic 400-800m double at the 1976 Olympics. The double is so difficult that few even try.

Wint retired after playing his part in a world-record run to secure the 1952 Olympic gold in the 4x400m relay. His stint on the track came at a time when Jamaica was still a British colony and was the source of overflowing national pride. As the island celebrates 100 years since his birth, one can’t help but reflect on how great Arthur Wint really was.