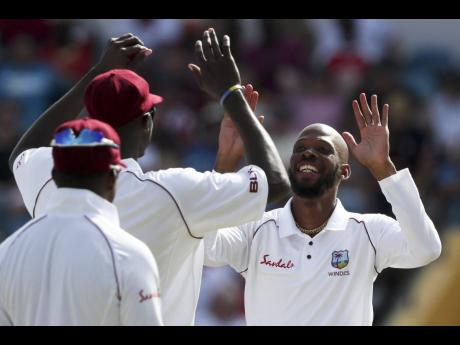 Former Windies pacer Winston Davis believes strongly that the Windies have the talent to return to the pinnacle of international cricket, but adjustments in the cricketers’ mindset and the relationship between players and administrators are required for that to happen.

Davis, who performed his last international duties for the Caribbean side in India in 1988, offered that advice on Tuesday night on the Mason and Guest cricket radio show here.

“West Indies cricket was at its zenith then, and I look forward to when we get back to those days,” the 61-year-old Vincentian said.

“There is no lack of talent in the West Indies, but the mindset – you have to have a reset of the mind of the players.”

Highlighting instances of players being at odds with Cricket West Indies (CWI), Davis said: “The West Indies Board has never been the best friend of the players and that is sad.

“There has always been a very contentious relationship between [Cricket West Indies] and the players, the two seeming always to be in conflict. They gotta resolve that. The board gotta look out for the interests of the players, and the players gotta accept the responsibility that they’re representing about five to six million people who look to them for a fillip, for a lift, and cricket does give the nation a lift.”

Davis, who made his mark for West Indies in One-Day International cricket, was paralysed after suffering spinal injuries when he fell from a tree in his native St Vincent in 1997.

He has lived in England since being flown there for treatment after the accident.

“I am very fond of saying to people up here that the West Indies as a group would never be an economic power, we would never be a military power, but in cricket, we were a powerhouse. We just need the guys to get back there – think cricket, think West Indies, think where we come from, where a fillip is and give it our best shot,” Davis said.

The former right-arm fast bowler said that he was disappointed that no spectators would be allowed into the Ageas Bowl, Southampton and Emirates Old Trafford, Manchester, where the Windies will play against England to retain the Wisden Trophy next month.

A group of 25 players, including 11 reserves, will leave the region next Monday to begin the three-Test series, which will be played in a “bio-secure environment” because of the COVID-19 pandemic.

Davis said he understood why the matches would be played behind closed doors but said that “when you have spectators, people who come to the games, it adds to the atmosphere and sometimes it gives you a spur”.

Adding that he supported CWI going ahead with the tour despite the spread of COVID-19, which has claimed almost 40,000 lives in the UK, Davis said: “We gotta make a move at some time.”