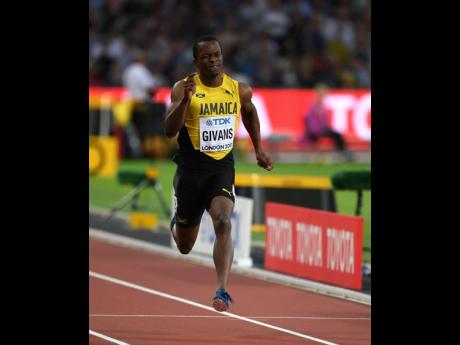 Senoj-Jay Givans, the 2017 World Championships team member, got his 2020 season off to a promising start in Florida on July 4.

With competition curtailed by the COVID-19 outbreak, that run equals the fastest time by a Jamaican this year.

The 100-metre heats at the event, dubbed the ‘Showdown in OTown’, produced notable times.

Heat five was won by 2016 World Indoor 60-metre gold medallist Trayvon Bromell in 10.06 seconds with the wind under the limit at 1.6 metres per second.

The 26-year-old Jamaican matched an effort by Oshane Bailey in Kingston on February 29.

His compatriots Brittany Anderson and Christopher Taylor were also in action.

World Under-20 record holder in the 100m hurdles, Anderson won her section of the women’s 200 metres with a wind-hampered time of 23.71 seconds.

Givans, Anderson and Taylor are all based in the US.

Meanwhile, Olympic 400-metre champion Shaunae Miller-Uibo was the star of this low-key affair.

The tall Bahamian won both the 200 and 400 metres, clocking world-leading times of 22.61 and 50.52 seconds, respectively. Other notable efforts came from Bednarek, who won the men’s 200m in 20.06 seconds, and world Under-20 100-metre record holder Sha’Carri Ricardson. The little American had a wind-aided run of 10.94 in the heats and backed it up with 11.05 seconds to win the final.

Last year, she dashed 10.75 seconds to win the NCAA Championships.