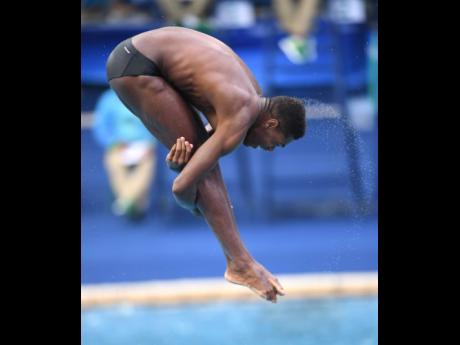 Jamaican Olympic diver Yona Knight-Wisdom says that the continued delay in the reopening of aquatic facilities in the United Kingdom (UK) will set him back in his preparations for next year’s rescheduled Tokyo Olympic Games.

As the UK continues to gradually lift coronavirus restrictions, pools remain closed with no clear indication of when they will reopen for athletes to return to full training. Among the facilities reopening their doors recently in England were restaurants and bars.

UK Prime Minister Boris Johnson, in a press conference last Friday, said that guidelines would be issued this week regarding the reopening of pools.

However, Knight-Wisdom, who is still under restrictions at his base in Edinburgh, Scotland, said that legislators should have been proactive in developing such protocols to facilitate a smooth reopening process for pools, if and when it is announced.

“It’s frustrating that the plans haven’t been put in place, so I think the communication between legislators and programmes such as British Diving haven’t been as good as it could have been,” Knight-Wisdom told The Gleaner.

He says other countries have moved to reopen their facilities, and expressed concern as restaurants and bars have resumed service in England with minimal observance of social-distancing guidelines.

“I think people can easily stay socially distant at the gym or at a swimming pool. I think people are more than willing to do so, whereas they have opened pubs in England, where social distancing isn’t going to happen. And the evidence was right there from the first night that pubs were reopening; it was absolutely crowded and packed. So I don’t understand how it is reasonable to open pubs but not gyms [or pools],” he said.

He has continued his training from home in the interim, and while he does expect to “play catch-up” once he returns to the pool, he says that the delay puts him at a disadvantage to those who would have already resumed preparation for the rescheduled Olympic qualifying event to be held in February 2021.

“It (Olympic qualifying event) is not far away at all. It’s going to come around very quickly, and not just the Games, but our qualification competition is in February, which is seven months way. So that’s not a long time,” he said. “There are many other nations that are back in training right now and I am seeing them doing their dives. Every day that goes by is a day that I am losing out to them.”

Meanwhile, Aquatic Sports Association of Jamaica (ASAJ) President Martin Lyn hopes that the situation can be resolved as soon as possible, and is confident in Knight-Wisdom’s ability to attain competitive shape for next year.