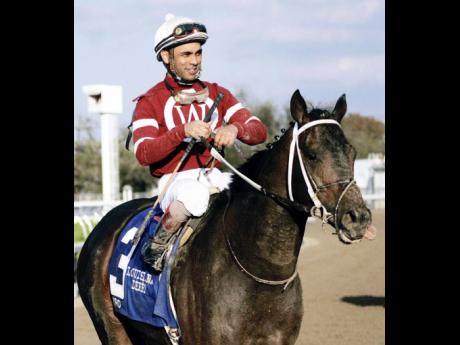 Having already turned back two other challenges throughout the one and a quarter-mile trip for three-year-olds and upward, FACTOR THIS was forced to dig deep in the stretch before reaching the wire by half-length in a time of two minutes, 4:52 seconds.

“He’s a cool horse. I get along with him, and he makes my job easy,” Bridgmohan said afterwards.

“You just have to get him in position, and he usually does it all. They come to him, and he fights. He makes me look good every time. He’s a hard-trying horse and as gutsy as they come. I’m just a passenger on him. He does it all.”

Bridgmohan broke the 4-5 favourite sharply and sent him to the front, but 26-1 chance PHANTOM CURRENCY quickly came to join and led into the first turn, posting easy splits of 24.99 seconds and 50.25 for the half.

FACTOR THIS secured a narrow lead up the backstretch as PHANTOM CURRENCY faded, but RY’S THE GUY assumed the mantle, sparking a duel into the top of the stretch while opening up a two-length lead on the chasing pack.

However, FACTOR THIS came away with the lead along the rails and appeared safe before HIERARCHY made things interesting late.