JAAA’s role in the return of sports 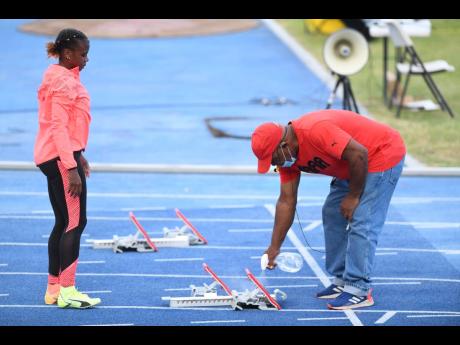 File
Megan Tapper (left) looks on while a meet official sprays the blocks before her 100m hurdles race at the Velocity Track meet held at the National Stadium recently.

Protocols developed by the local track and field federation have paved the way for the return of sporting activities in Jamaica. That’s the view of outgoing Jamaica Athletics Administrative Association (JAAA) president Dr Warren Blake.

Not only have the JAAA protocols opened the door for the resumption of the 2020 track and field season, but according to Blake, they will assist other sporting bodies when their time comes to stage competitions again.

Speaking last week in the context of how the COVID-19 outbreak has led to the cancellation of sporting events, Dr Blake shared: “Even in this period, we were the ones who put protocols in place, we were the first organisation in Jamaica to put protocols in place to allow for a safe return to activity and we didn’t keep them to ourselves, but we sent them to all the sporting federations in Jamaica.”

The rationale for the circulation of the JAAA protocols was straightforward.

“We sent it to the leaders of all the sporting federations so they could use it as a template for their sporting associations because we realised that sports medicine experience is not as great in some of these federations as in track and field,” he explained.

The protocols facilitated the staging of a series of track and field meets at Ashenheim Stadium on the grounds of Jamaica College and one at the National Stadium. These meets saw notable performances by super sprinters Shelly-Ann Fraser-Pryce and Elaine Thompson Herah, World discus silver medallist Fedrick Dacres and by long jump World champion Tajay Gayle.

At the most recent leg of the Velocity Fest events staged by a team led by MVP President Bruce James, Fraser-Pryce and Thompson Herah laid down 100 metre times of 10.87 and 10.88 seconds, with Fraser-Pryce’s time being the fastest run over the distance this year.

Other notable performances came from Gayle, who leapt 8.23 metres, Julian Forte, who clocked 10.03 seconds in the 100m, Dacres with a mark of 64.45 metres and World triple jump runner-up Shanieka Ricketts, who did 14.21 metres. Like the fast times by Fraser-Pryce and Thompson Herah, the marks by Dacres and Ricketts came last Saturday inside the Stadium.

The meets were held without spectators as part of a series of measures to prevent a spread of the virus.

Blake advised that the protocols were also sent to the Ministry of Sport.

Horse racing at Caymanas Park was the first sport to return in Jamaica after the shut-down.