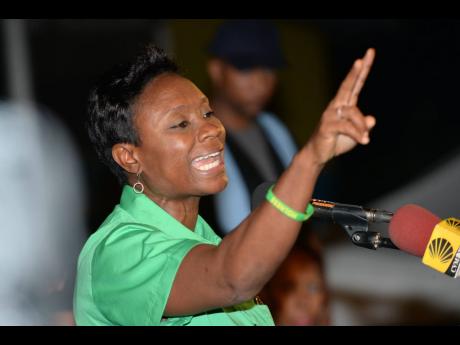 Like she did during her second Olympic Games in Seoul in 1988, Juliet Cuthbert-Flynn is approaching her second general election with a sense of composure.

Cuthbert-Flynn, who won two silver medals at the Barcelona Games in 1992, told The Gleaner that the experience she garnered in 2016, when she brushed aside the People’s National Party’s then incumbent Paul Buchanan by 2,225 votes, has been useful in her battle with exciting new contender Krystal Tomlinson.

“Having won the last time, I got the chance to prepare for this election, and like every Olympic cycle, I didn’t just show up at the Games and run. I prepared for four years, and that is what I have done in the constituency of West Rural St Andrew,” Cuthbert-Flynn said. “The work I would have done is try to meet the needs of the people in my constituency and the things that I said that I would deliver.”

She continued: “Not everybody is pleased, but my experience in track and field also enables me to be comfortable with that, because not every training session went the way that we planned. I got injured along the way, and sometimes it was raining and I couldn’t train as I wanted to, but you have to make the adjustment.”

Cuthbert-Flynn’s experience as a former athlete is also helping to deal with Tomlinson who, with her popularity and youthfulness, has been making waves on the campaign trail.

“I am approaching this new challenge the same way I dealt with any new person who was trying to come and take my spot at Olympic trials. We have heard a lot of time that this person is going to be the next Merlene Ottey, and it never came to past. So, it is the same thing; people will come up and you have to know their strengths and their weaknesses, and you work along those lines,” she said.

Although she is composed, Cuthbert-Flynn says that she is still experiencing pre-race jitters as she is eager to continue the work to bring comfort to the people of the constituency.

“The Jamaica Labour Party and Prime Minister Andrew Holness has a lot of work to do and I am doing my best to make sure that the needs of my constituents are met,” she said.