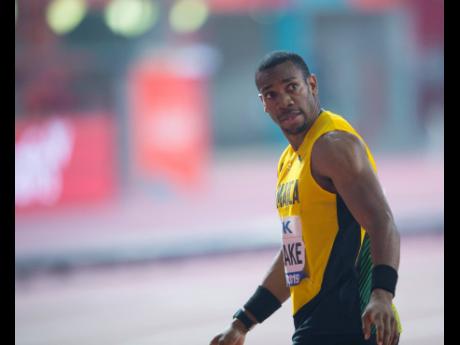 But he says Blake has to remove the psychological pressure of being Jamaica’s top male sprinter after Usain Bolt’s retirement, as well as overcome his fear of reinjuring himself.

“Yohan technically has changed his form because of the injuries, so it’s about getting him in the mindset of not thinking about getting hurt again,” Frater told The Gleaner. “He has made some improvements but he still has a lot of work to do.

“He has ran the second-fastest [100m] time in history (9.69 seconds). The only man to ever run faster was the great Usain Bolt, so you cannot ask him for more than that. He is coming back from a devastating injury where people thought his career was over. So right now I don’t want to set any limits on him. Hopefully, he can get back to some semblance of himself, but if not, I just want him to go out and enjoy himself and do the best he can.”

Bailey-Cole’s hamstring issues have kept him mainly on the sidelines and out of competition for three seasons, but Frater says the focus is to help the 28-year-old overcome his fitness problems.

“Kemar Bailey-Cole, it’s just about keeping him healthy,” Frater said. “Once he is healthy, he can be one of the best, if not the best in the world. He is doing the proper strength work and correct training for the injury problems he has had over the last few years, but it’s just to help him stay healthy. If we can do that, he can accomplish great things.”

Blake and Bailey-Cole were both members of Glen Mills’ Racers Track Club, but both left after airing grievances with trainers publicly. Blake was being conditioned by Racers technical director Patrick Dawson while Bailey-Cole was trained by Gregory Little.