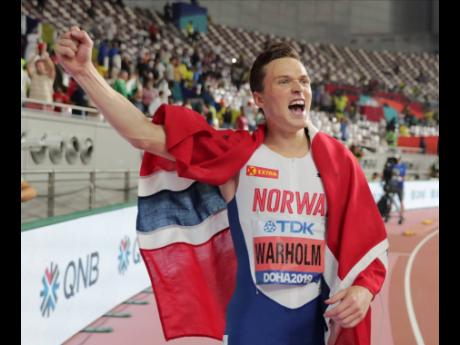 For years, Jamaica’s incomparable Usain Bolt was the big draw at the Ostrava Golden Spike meet.

When the meet is contested today, Norwegian Karsten Warholm could end the 28-year reign of Kevin Young as the fastest 400-metre hurdler of all time today in the Czech Republic. Warholm narrowly missed Young’s Olympic winning mark of 46.78 seconds last week, and many believe that he 2017 and 2019 World champion has the potential to take the record.

In Stockholm, Sweden, on August 23, Warholm ran solo to history’s second-fastest time: 46.87. He lines up in today’s World Athletics Continental Tour meet, and Okeile Stewart, who coached Rushell Clayton to the bronze medal in the women’s 400 hurdles at the 2019 World Championships, thinks the record is within reach.

“I believe that that world record as you would have seen – 46.78 – is quite within his grasp,” concluded Stewart at the end of an admiring September 7 analysis of Warholm’s approach to the race.

A mistake at the last barrier in Stockholm was duly noted.

“I would believe if he hadn’t hit that last barrier, his momentum would have been a lot better going into the last 40 metres. Would he have gotten the world record? I’m not quite sure, but he would have gotten a lot closer than the 46.87,” Stewart calculated.

The Jamaican thinks technical improvement will help the Norwegian.

“His hurdling is not the best of hurdling. He’s not the cleanest of hurdlers, and I think one of the things, if he works on how he touches down and moves off the first stride from off the hurdle, he would be a lot more efficient,” Stewart recommended.

He also pinpointed an additional sign that Warholm is faster than ever. Scarcely an hour and a half after his near miss, the 24-year-old hurdler won the flat 400 metres in 45.05 seconds, which is just a shade off his national record of 44.87 seconds.

Warholm ran solo to his second sub-47 clocking in Stockholm and will probably be in the same situation today, but Stewart is impressed by the Norwegian’s ability to focus.

“This guy does not need competition to run fast,” he said.

Warholm, meanwhile, is simply trying to do his best.

“I will give it my all like I always do, but you never have a guarantee for anything,” he said in a World Athletics interview.

Another chance of a record comes in the men’s shot put, with Olympic champion Ryan Crouser in fine form.

The American has thrown 22.91 metres this season, and the world record, 23.12 metres by Randy Barnes in 1990 isn’t far off. In Poland on Sunday, Crouser made his 2020 European debut with a high-flying winner taped at 22.70 metres.